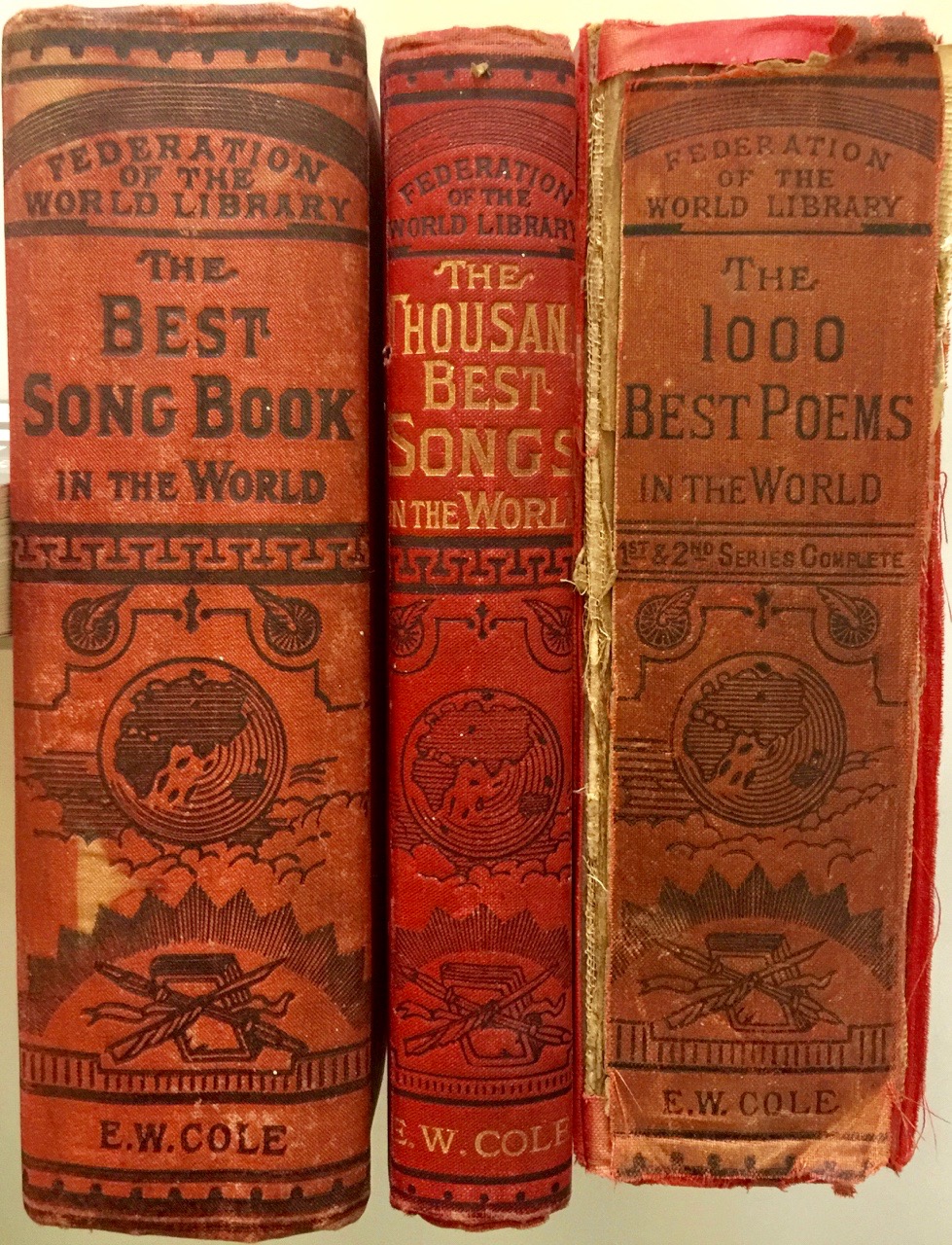 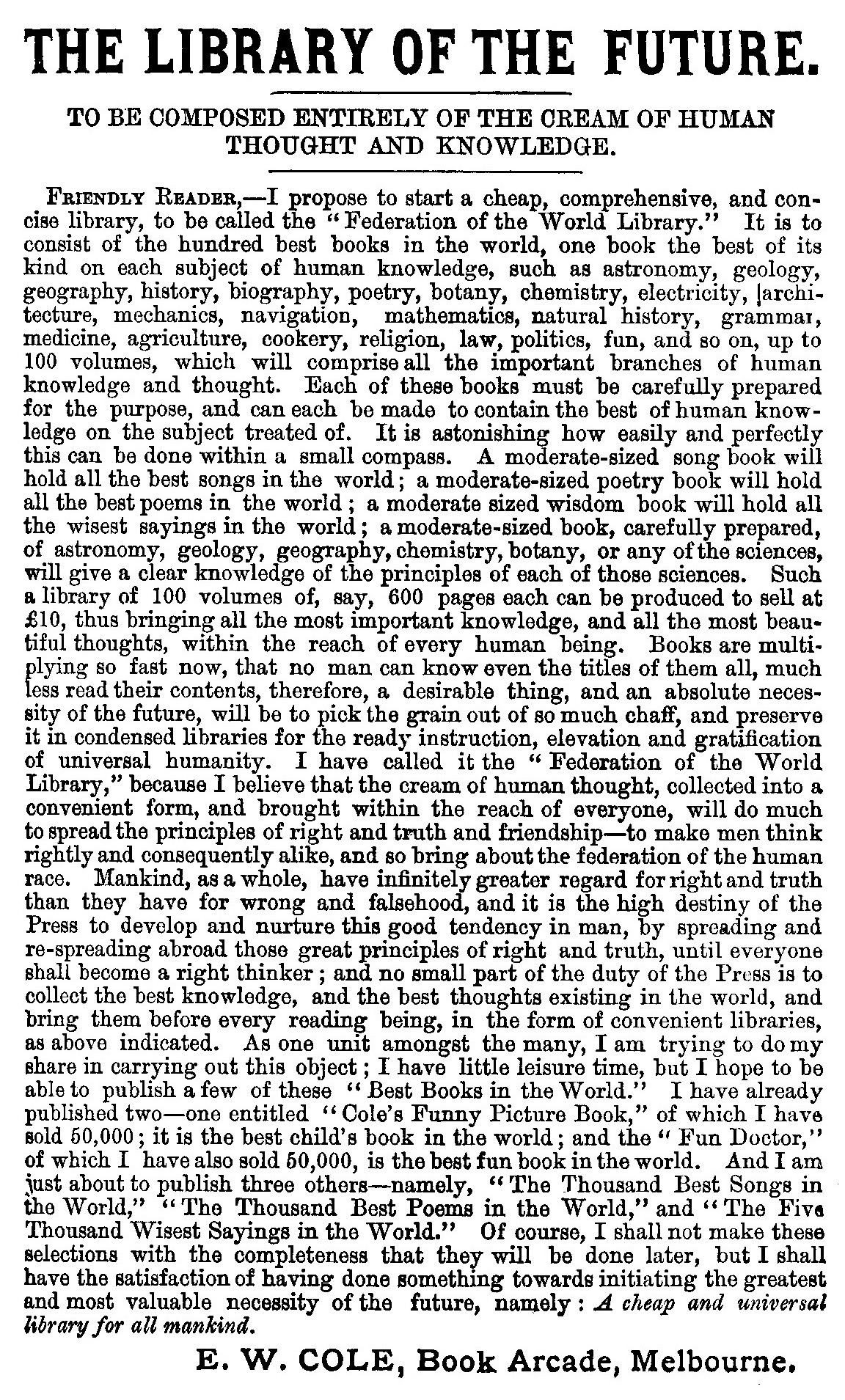 The above page appears after the title page of Cole’s publication The Thousand Best Poems in the World and gives an insight to his belief in the fundamental goodness of mankind and the role that books would play ...by spreading and re-spreading the abroad those great principles of right and truth, until everyone shall become a right thinker. The introductory pages of this book, including the above, are available here (5 pages, 8.6MB).

Cole’s Federation of the World Library addressed what might be called ‘conventional’ subjects – astronomy, geology, etc. Later in life, he changed the name of the library to The Cream of Human Thought Library and amended the subject range to more personal subjects, as indicated in the following list. 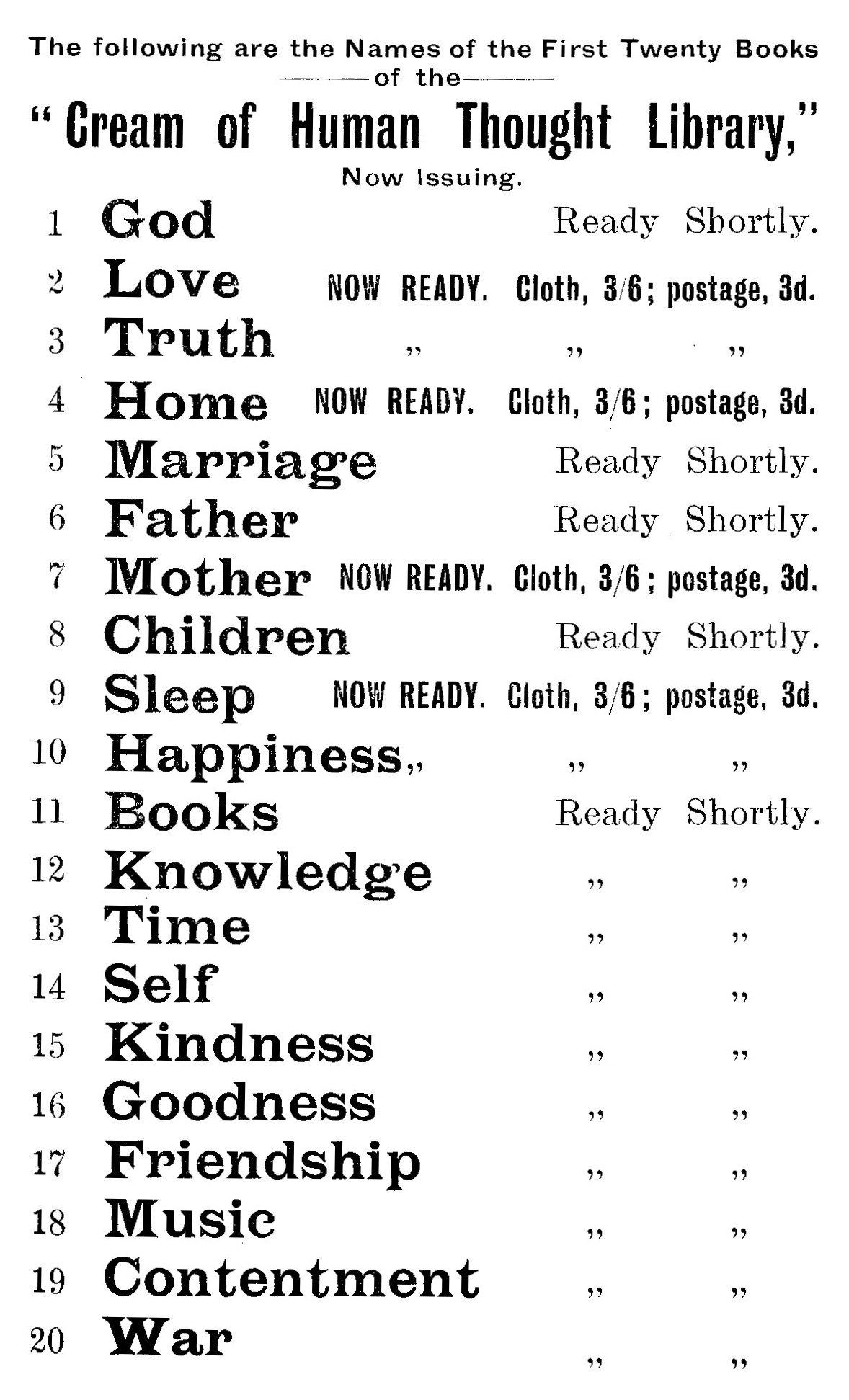 This list is taken from the advertising for his ‘new’ library as featured at the end of many of his publications. A 12 page summary of his advertisements is available here (21.6MB) and covers:

The actual Cream of Human Thought Library varies somewhat depending on where you look. To the best of the webmaster’s knowledge, 10 volumes of the library were produced – 8 in individually printed books and 2 (Noon and Night) as part of Cole’s Selected Works Part III.
The 8 individual book covers are shown below.

Truth was produced in two editions, with the first edition being introduced to the reader on the title page as:
… Being Volume One of the Cream of Human Thought or Much-in-Little Library. See page 260.
Cole then dedicates the book …to the memory of my Mother in gratitude for all her loving care.
In the following Preface, Cole asks:
Nearly two thousand ago Pilate is said to have asked Jesus “What is Truth?” Seemingly, as a question that could not be answered, he walked away and Jesus did not answer. Since then hundreds of millions of men and women have thought about, spoken about, and written about Pilate’s question – perhaps the most important question that ever was asked in this world.
Then follows two pages of contents showing 41 subject headings on Truth up to page 203.
The first 10 introductory pages of the book are available to view or download here (16MB).
Cole was never one to miss an opportunity to cross-promote, and he then includes 31 pages on the subject of lies, as he had also written another book dedicated to this subject – The Lies We Tell. The reference to ‘See page 260’ on the title page takes us to the series of advertisements for the others in the series of the Library.
Cole then adds 3 more sections which are not included in the Contents Pages, and each section has page numbers starting again:
Sayings of A Hundred Men In Praise of Books (page numbers 1 – 51)
What Books Have Done and Will Do For Mankind (page numbers 1 – 21)
Printing (page numbers 1 – 7)
The second edition is dated 1917, the year before Cole died, and is considerably ‘cleaned up’. The end contains the same advertising material for Cole’s publications, but none of the ‘additional material’ which suggests that Henry Williams played a significant role in this edition, as it is more ‘professionally published’.

The cover of Love describes Love as The Sweetest Thing in the Universe. The cover, title page, Preface to Authors and the first page (devoted to Joseph Addison) are available here (6MB).
Many of Cole’s publications include pictures and in the Preface gives us an insight: When one has just perused, and been impressed with the beauty of a quotation, it augments the pleasure and interest to be enabled to conveniently look up and glance upon the face of the writer.
Following the 302 pages of quotations comes a similar cross-promotion advertisement of the other volumes in the library and other Cole publications.
For good measure he then adds another un-numbered page entitled Races and Population of the British Empire, where he uses the opportunity to further his beliefs about the future, saying: The British Empire now comprises one quarter of the Globe, and one quarter of its people, forming a great cosmopolitan power; and which, maybe, (in conjunction with the before-mentioned English-speaking, cosmopolitan, Free-governing, Progressive Power, the United States) is destined to form the nucleus of a coming world federation.
And before signing off, he adds a 2 page summary of The Numerical strength of Christianity and the Ten Principal Non-Christian Religions of Mankind.

Cole dedicates this volume to his own mother and the brief Preface states: This volume offers, in a compact form, quotations from various sources regarding ‘Mother’ – her unwearying devotion and care, her undying love, and the beauty and sanctity of motherhood. The work has been a labour of love, and the editor feels assured that the reading public will find many things to accord with their own personal experience. Without further comment the book is left to speak for itself, and that readers may derive both pleasure and profit from it is the earnest wish of, Yours sincerely, E. W. COLE.
Following 429 pages of quotations, there are just 3 un-numbered added pages promoting other publications – Happiness, Sleep and Cole’s Funny Picture Book.
The preliminary 7 pages are available here (11MB).

Preceding the 411 pages of quotations on Home, the 10 introductory pages show Cole and his family at their home ‘Earlesbrae Hall’ in Essendon as well as a dedication to Cole’s late wife, Eliza. These 10 pages are available here (14MB).
Cole includes an 8 page Family Record Section for the reader to complete his or her own family records immediately after the quotations, followed by the normal cross-promotion (9 pages) featuring other Cole publications to complete the volume.

The 5 introductory pages for Happiness are available here (9.4MB) followed by 443 pages of quotations and 5 pages of cross-promotion. In common with many of his Prefaces, Cole acknowledges that It has not been possible to trace the authorship of all the quotations, and those unacknowledged are to be understood as anonymous.

349 pages of quotations on Sleep are preceded by 5 introductory pages available here (9.2MB). In an unusual event, the publication date is included – March 1916. The Preface includes a photo of Cole and his dog enjoying a nap in his study, with the caption The Editor caught napping also the dog caught napping. 12 pages of cross-promotion complete the volume.

Music contains 480 pages of quotations and was published in 1918 – the year of Cole’s death at 86. The 5 introductory pages, 8.3MB in size, are available here. Before the 20 pages of cross-promotion are added 2 other items – 6 pages of E. W. Cole’s Federation of the World Medals, as well as an article republished from the Essendon Gazette, dated March 21, 1918 entitled Mr. E. W. Cole An Octogenarian Author. A transcript of the article is available here.

This 1917 publication contains no Preface but Cole includes 2 quatrains from his What Books Do for Mankind:

Books show that good men everywhere
Believe that war should cease;
And Books will make that feeling grow,
And more and more increase.

Books thus will cause the flag of peace
Through earth to be unfurled –
Produce “the parliament of man,”
And federate the world.

479 pages of quotations then follow, ending up with 18 pages of cross-promotion. The 8 introductory pages, including the 2 quatrains, are available here (12.5MB).

The only place these 2 volumes appear are in Selected Works Part III. This overall file is 474 pages and 126.9MB in size. While they are listed here as the 9th and 10th in the series, they are numbered as items 10. and 11. in the Selected Works, in between 9. Uses and Curse of Tobacco and 12. God is Truth.
As often occurs, each has its own page numbering – Night with its own pages 1 – 150 and Noon’s pages 1 – 20.
Both have been transcribed separately and 91 pages of Night is available here (125MB) and 15 pages of Noon is available here (21MB).