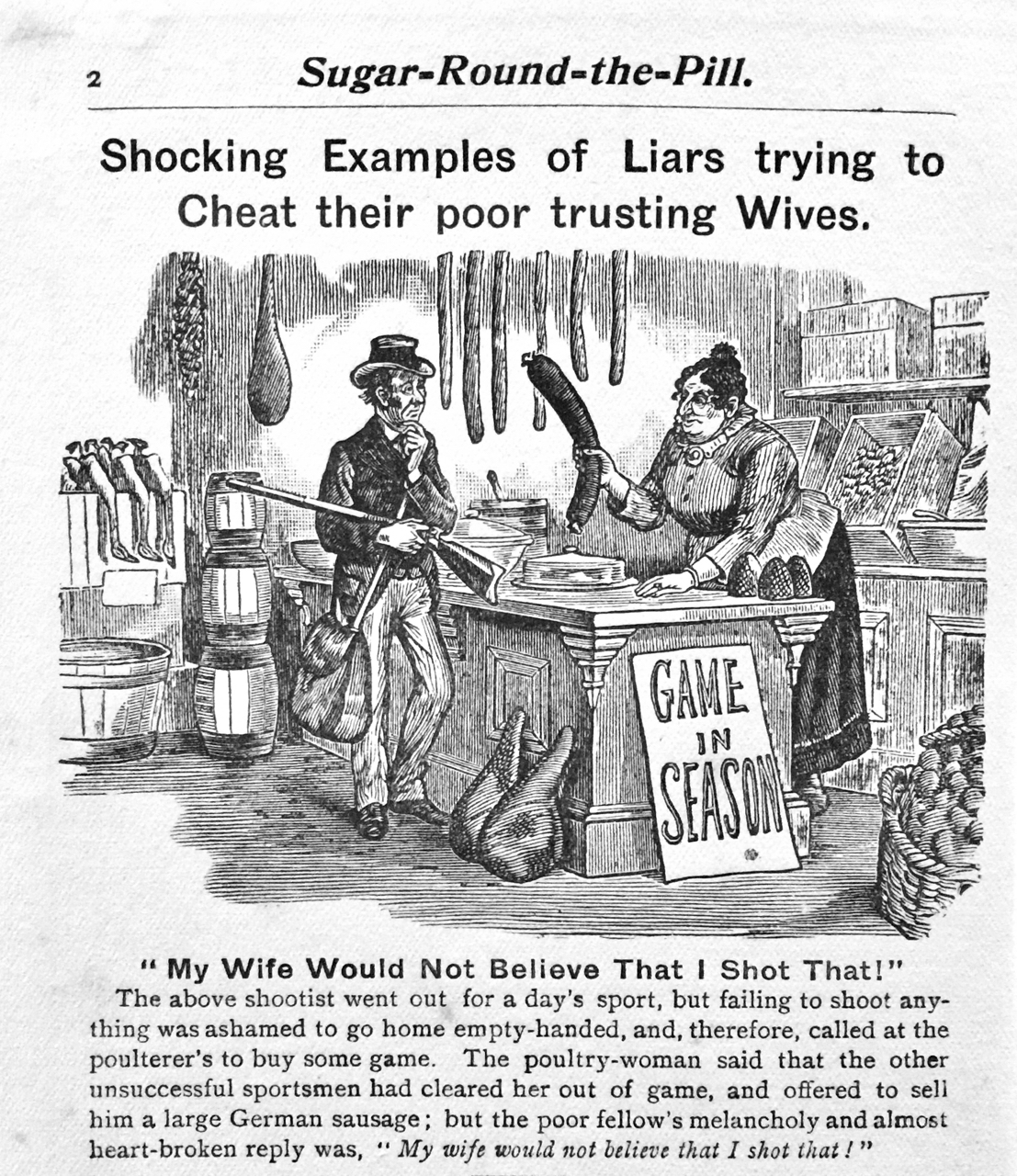 Around 1890, Cole wrote/compiled a book on lying called Sugar-Round-the-Pill: A Cyclopedia of Fib, Fact, and Fun, subtitled with Containing 1,500 Items of FIB and FACT, aptly illustrated by 1,250 Items of FUN. The image at left appears on page 2 of the book. On page 4 Cole says:

It would be exceedingly instructive if a table could be made showing the number of lies per thousand people told in all the countries of the world in a year. If this could be and were done, I expect when they are totted up we should find most nations in this respect very much alike, and each very high in their figures … Many traders, man-pleasers and others, average a hundred lies a day, year in year out. I should say that in the entire world, not less than eight thousand millions per day, or an average of five lies for every person, are told or acted … Lying is varied in its nature, ranging from the meaningless lie of the thoughtless to the diabolical lie of the malicious, that would take away the character or life of a fellow-creature. In the following pages I shall attempt to show the various types of lies that are told – White Lies, Half Lies, Complimentary Lies, Vindictive Lies, Justifiable Lies in extreme cases to save life, etc.; and so on.

In 1917, he wrote a second book called The Lies We Tell. The contents are:

A full copy of all pages of The Lies We Tell as a 47 MB .pdf is available here.

The statement that mankind in the infinite future will know a million-fold as much as they do now I still believe to be a true prediction. At present, we poor, imperfect mortals cannot comprehend it all, but how does the matter stand as far as we can see? We know a thousand times as much now as primitive man did, and our knowledge is increasing in all directions, and yet the great ocean of truth practically lies all undiscovered before us. We cannot conceive a beginning or end of time; we cannot conceive a beginning or end to space; we cannot conceive a limit to the number and variety of the works and truths of God in his illimitable universe, but we are gradually learning more and more as time goes on, and time is without end and truth is eternal.

I have held, since I was capable of thinking, that truth is the mightiest power for the good of mankind. I have never for a moment wavered from that thought, and I cannot do better than quote the concluding paragraph of a child’s medley book of fun and seriousness which I published some thirty years ago [1887]. I still hold exactly the same view of the exceeding value of truth to advance, unify, and happify mankind, as is expressed in that paragraph, which is as follows:-

“Nine-tenths of man’s misery is caused by his ignorance of the truth – his bodily pains – his premature death – his poverty – his crimes – his tyranny – his inhuman wars – his enmity towards other races – his religious hatreds – all result from his ignorance. If men thoroughly knew the truth, disease – want – crime – tyranny – war – hatred of race – and bigotry would cease, and they would live and work through life in comfort and brotherly love, and few would die except from ripe old age and rarely occurring accidents. But I have great hopes for the future – slavery is ceasing, education is spreading, sanitary, surgical, and medical knowledge is advancing, social and political congresses are meeting, industrial exhibitions are opening, telegraphs, railways, and steamships are tying the nations together by a network of inter-communication, and the printing press is disseminating universal information more and more among the masses. And further, man’s capability for knowledge is unlimited, and the universe around him is illimitable for its exercise; a grand and glorious, and ennobling, a sublime future is before him – he knows some – he knows much truth already; but I firmly believe that it is not a thousandth – not a millionth – part of what he is destined to know in the future. That for man, through his innate love of – grand appreciation of – and persistent search after, and consequent discovery of, truth, there is indeed a good time coming. And now, dear reader hoping that my unusual medley of a book will please, instruct, and do good to some, and offend none, I bid you farewell; and that you, in common with all, may become wiser and wiser, and consequently happier and happier, as time goes on, is the sincere wish of yours truly, E. W. COLE.”