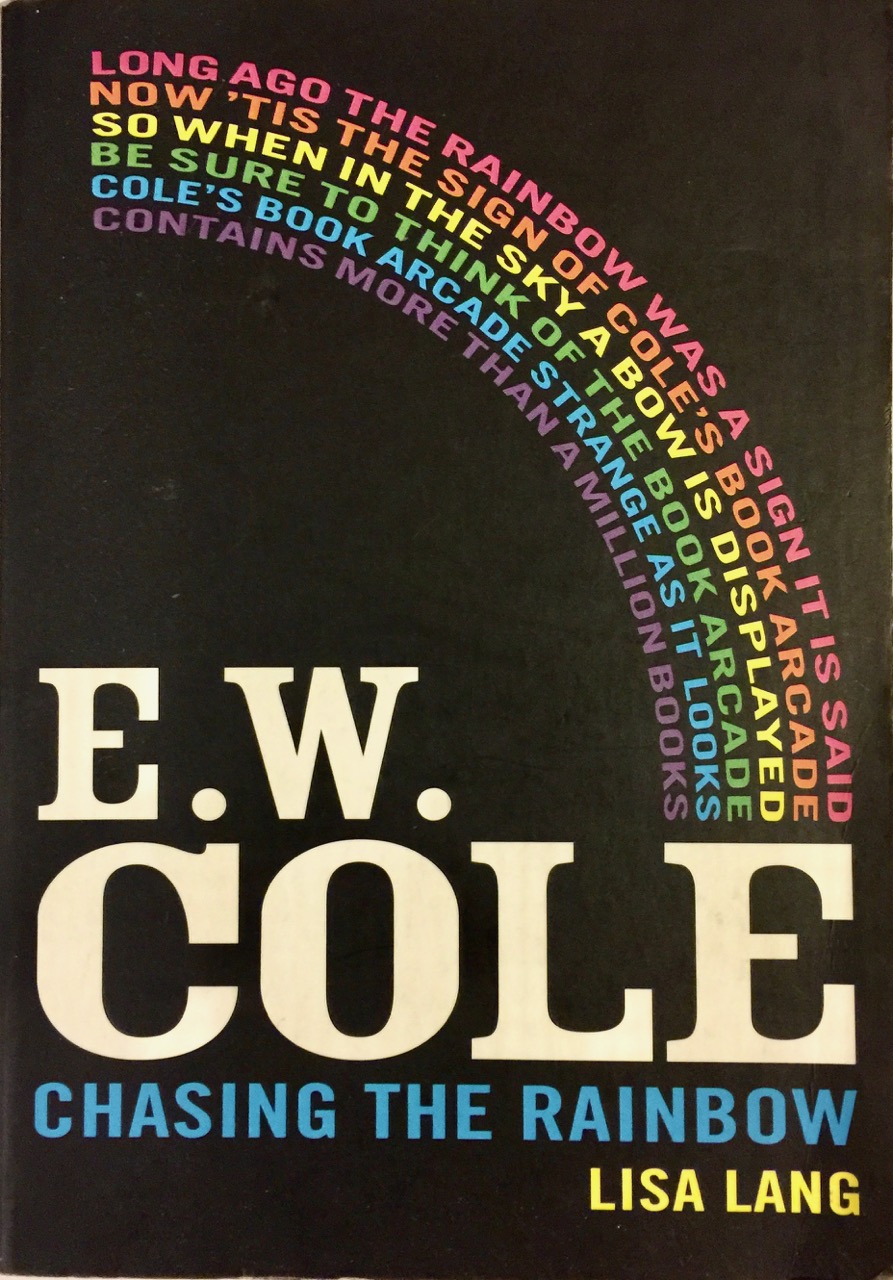 This publication was produced with assistance from the State Library of Victoria and was supported by the City of Melbourne.
In her Introduction, Lisa says:

Edward Cole caused some controversy when he trademarked the rainbow in 1874. Some people believed the rainbow was a Christian symbol – the sign of God’s covenant – and should not be used to make money. Preachers berated him from their pulpits, and Edward received some angry letters. He held his ground. He plastered the rainbow’s image across the white facade of his Bourke Street Book Arcade, and across the front cover of Cole’s Funny Picture Book. His plain-dressing wife wore a rainbow brooch at her throat.
The history books are filled with men searching for their pot of gold. Men seeking land, trade routes, precious materials, vast riches. Some men found their pots of gold in Victoria during the 1850s gold rush – the decade when hundreds of thousands of excited gold seekers came to Victoria. Among the hopeful was Edward William Cole. Edward never did find much gold, but he turned out to be a brilliant entrepreneur.
Publicity was his specialty. In the 1870s most businesses treated newspaper advertising as little more than an extension to pinning a notice to a tree. Ads were straightforward and factual. But Edward’s ads were playful, silly and actively engaged the reader – so much so that they once caused an edition of the Herald newspaper to sell out. He grasped the potential of advertising like a man who had grown up with Coca Cola and television, not one born into 1830s rural England and taught to read with the family Bible.
For all his business acumen, Edward was also an idealist. In his Book Arcade, customers were encouraged to read for as long as they liked. Books were damaged and stolen, and a magistrate once criticised his policy for its attractiveness to thieves. But if the easy atmosphere encouraged thieves, it also encouraged the poor and uneducated to read without intimidation. This mattered to Edward. He believed in world peace, equality and education for all, and believed these were achievable within a few generations. No wonder he loved the rainbow: a symbol of peace harmony and diversity. But the rainbow is also an ideal: perfect, unattainable, forever out of reach.

This is Edward’s story. The story of a man who went looking for a pot of gold, and ended up chasing the rainbow.