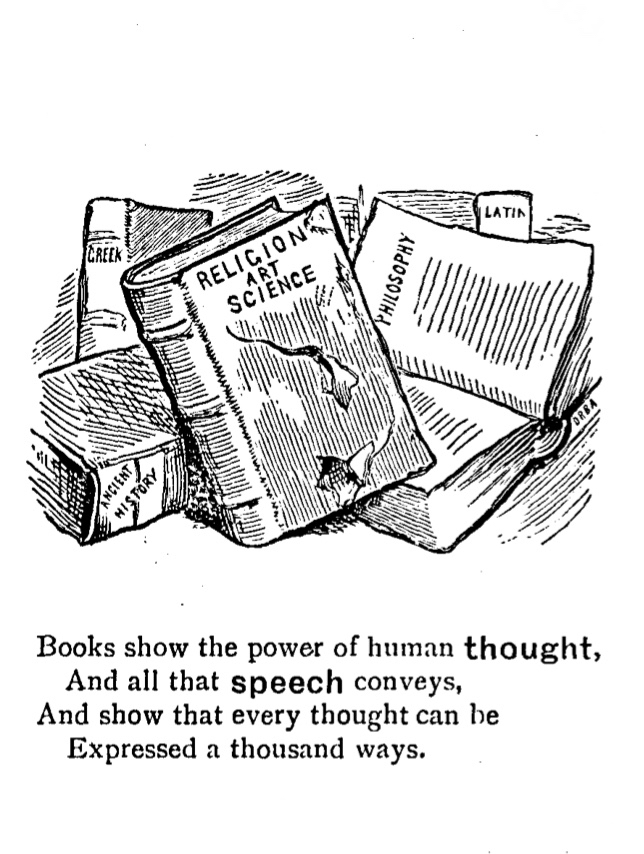 Sayings of 120 Great Men in Praise of Books

In addition to Cole’s continued effort to educate his readers, he understood the importance of engagement with his readers. Education (and life) for Cole was an active interactional experience and not an academic exercise. The front cover of a book, digitised by the National Library of Australia appears below left and available to view or download here (86 pages, 23MB).

The subsequent page (not shown) is headed Opinions on the Subject by the following 120 Eminent Thinkers and then lists them alphabetically – from Abbot and Adams to Wordsworth and Yriarte.

Still without revealing the answer to the riddle, the next page (below right) follows up with the challenge of the riddle: 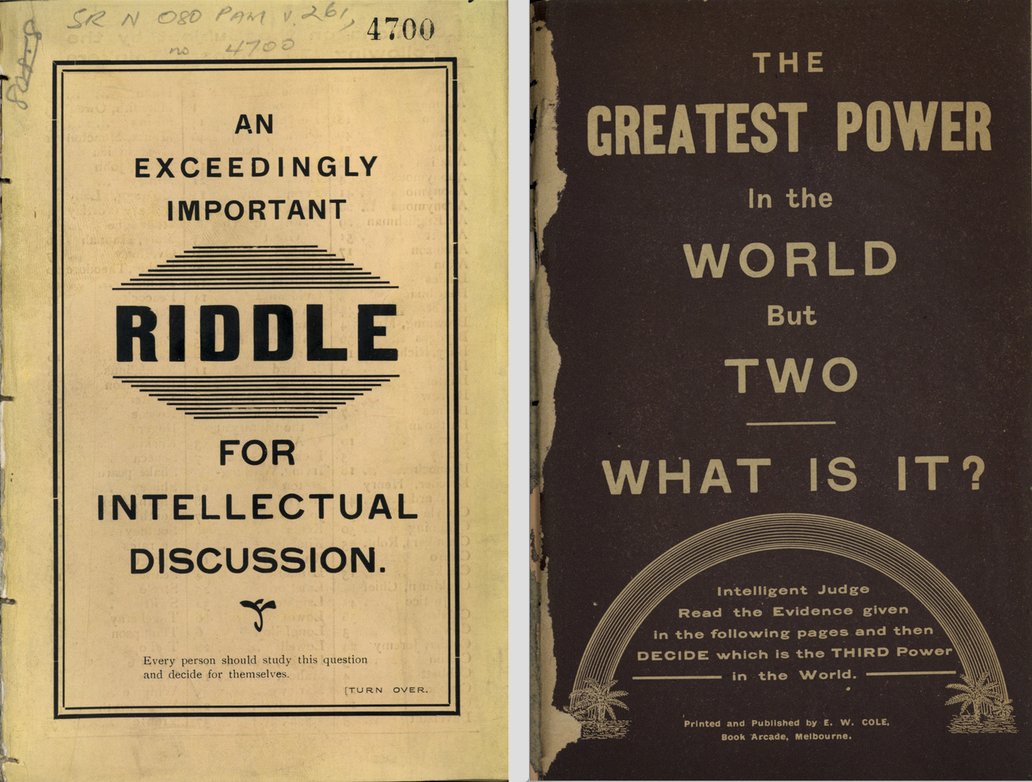 Overleaf, he gives us the answer to his riddle as follows:

Reader,
This Book and its Title constitute a kind of Riddle, for friends to talk over and debate. “Which are the three greatest powers in the World?” Are they, or are they not, Truth, Love and Books?

He then goes on to summarise Sayings of a Hundred Great Men In Praise of Books. What happened to the other 20 Great Men is unexplained, but supports the idea that Cole never let detail get in the way of a good story.

The same content is also included in a book published in the last year of his life, 1918, and entitled In Praise of Books on pages 5 – 55. A digitised copy (287 pages, 64MB) of the whole book is available here.

What Books Have Done and Will Do For Mankind

The Melbourne Age on page 4 of their July 12, 1905 issue reported the following:

Mr. E. W. Cole, of Book-Arcade fame, has written a versical eulogy of reading, entitled, ‘What Books Do for Mankind.’ In the course of 250 rhymed quatrains Mr. Cole has embraced every idea that could possibly be conceived as to the pleasure and utility to be derived from literature. The verses cannot be described as metrical gems, … but the thought they contain in urging the priceless value of books in every purpose of life should be an inspiration towards that love of reading which is a keystone of knowledge.

Cole made no argument for the literary value of his quatrains. In fact he explains his attitude to verse as follows:

No claim for poetic excellence is put forward for these verses. I know many of them will be considered imperfect by poetical authorities. They are of the Dr. Watts order of poetry, and are simply intended to teach by conveying valuable facts to the mind in a concise and plain manner by means of verse, and thus I claim that probably the reader never saw so much said in praise of man’s most precious and best earthly possession. BOOKS, in so small a space. The mode of teaching by simple verse has done much to educate mankind. Probably Dr. Watts, through his simple verses in the commonest of metres, has done more to educate the young than any man that ever lived. Some say Longfellow’s “Psalm of Life” is not poetry but merely a piece of  versification. It may be so, but I venture to affirm that its splendid teaching has done more good to mankind than all the poems of Shelley, Browning and Swinburne put together. Again, take the couplet:
“If at first you don’t succeed,
Try, try, try again.
This may not be good poetry, but it has been of greater value to millions than many big books of what is called poetry. Again, the most frequently repeated verse in the English language is
‘Thirty days hath September,
April, June, and November;
February hath twenty-eight alone,
All the rest have thirty-one,
Except in a Leap year, at which time
February’s days are twenty-nine.”
I doubt if the poetical critics would call this good poetry, and yet it is the most quoted and most useful verse in the civilised world. On these lines my excuse for some poorly constructed verses must be their great utility – E. W. COLE.

Despite the Age’s claim of 250 quatrains, it was in fact 200, and these are reproduced in Cole’s Cosmopolitan Reasoner on pages 232 – 6 and the 5 page 14MB file can be viewed here.

Cole also published a shortened 144 quatrain version and published them in 3 separate publications: 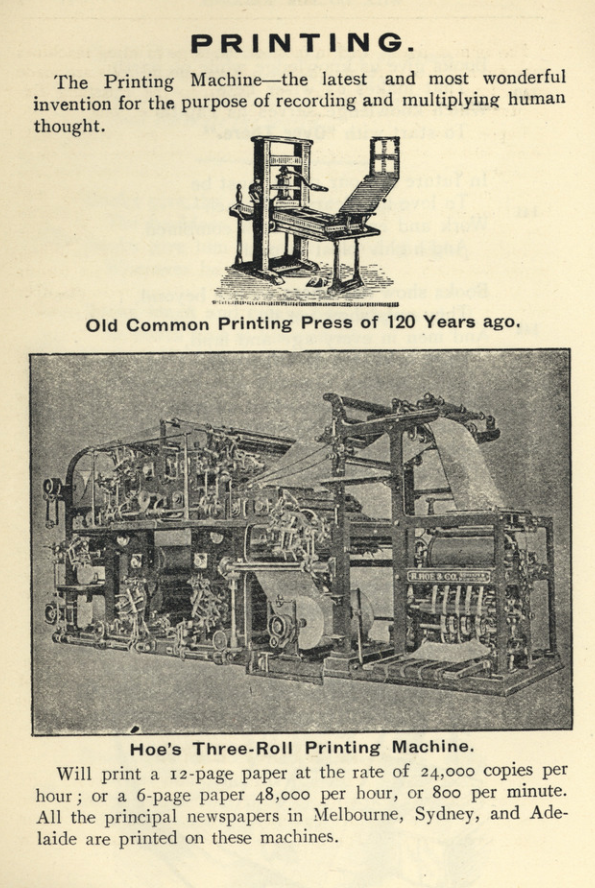 The above illustration and article on Printing appears in 2 of the publications above,  The Greatest Power in the World But Two on pages 78 – 83, and Cole’s Cosmopolitan Reasoner on pages 242 – 3, the 6.4MB 2 page file is available here.

Cole goes into great detail with statistics on both book and newspaper printing, and in the year 1905 also indicated potential environmental issues by stating in the article:

A large quantity of Esparto grass is used in some countries, but the great bulk of printing paper is now made from wood, and whole forests are denuded to supply demand for material for the books and newspapers of the world. In fact, the quantity of timber required for railway sleepers and printing-paper foreshadows a ruinous coming danger unless vast forests of wood are planted. Besides, paper, in hundreds of other ways, is the most commonly used article in the world.