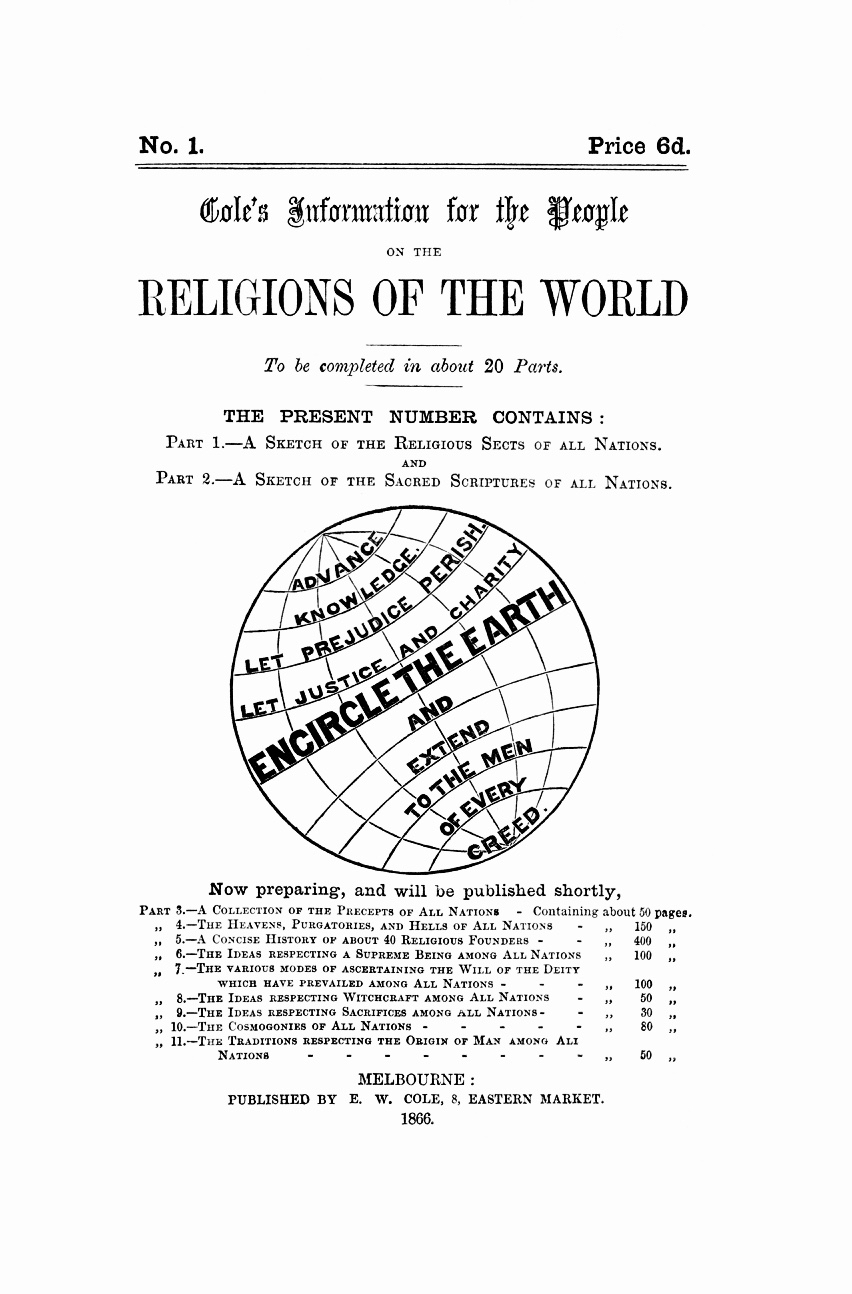 My principal hobbies have been — 1st, The studying of the various religions of mankind; 2nd, The starting and running a peculiar institution called a Book Arcade; 3rd, Preparing and publishing “Much-in-little” books for the people; 4th, Publishing and distributing essays and medals on “the Oneness of Man and the Federation of the whole World.”

The cover of his first religious publication published in 1866 is shown at left – Cole’s Information for the People on the Religions of the World – To be completed in about 20 Parts. The present Number contains Parts 1 and 2. It was prepared and published at the same time as Cole was just starting his bookselling business (see Turnley Chapter 7 and Broinowski Chapter 5). The base of this first publication shows Cole was planning eleven parts containing a rather significant number of pages – 990.

His next publication, as shown below left, is The Real Place in History of Jesus and Paul Part I: Book I – Miraculous History of Jesus. Book II – Jesus and Paul both Honest Visionaries dated 1867. It is interesting to note that Cole claims the group authorship of EDWIC ***, C.W., M.L.D.A., &c. Cole never explained why he claimed joint authorship or his own anonymity, but he gives a hint to the fact he was the only author in the dedication on the following page:

To the Rational Christian of All Denominations This Humble Attempt to Delineate the Real Character of Jesus and Paul is Respectfully Dedicated by the Author.

These publications caused Cole much condemnation from the public and the churches, but as was his wont, he persisted with his portrayal of religion being subject to the same analysis as any part of life, and expressed his concern that people should keep an open mind, when the following, year 1868, still under the anonymous EDWIC *** but this time without co-authors, Unlimited Mental Freedom Necessary to the Welfare of Man: An Essay Respectfully Addressed to Thoughtful Men. The front cover appears below right.

The back cover of this publication claims that:

Will be published July 20th [1868] Part II of The Real Place in History of Jesus and Paul, Price 1s.; by post 1s. 6d. Also, will be ready July 20th, Vol I, containing Parts I and II, of the above work, complete in itself, being an unusual review of the Miraculous History of Jesus. Octavo, cloth, price 3s. 6d.; by post 4s. 6d. Sold by E. W. Cole, 8 Eastern Market, And All Booksellers. 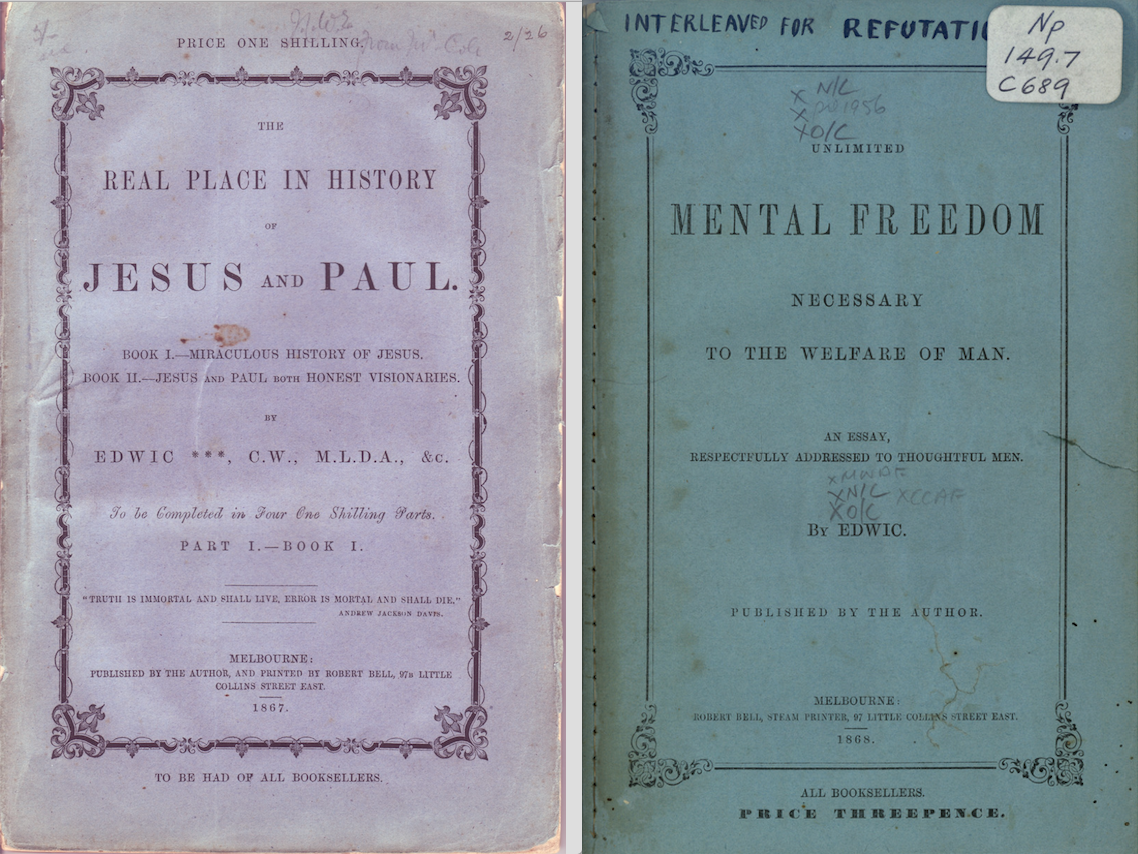 The only known copy of The Real Place in History of Jesus and Paul Part II is part of a publication bequeathed to the NLA who’s ex-libris page says Free thought and radical collection bequeathed to the National Library of Australia by Harry Hastings Pearce. Although professionally printed, it is rather strangely assembled and includes three sets of page numbering:

Part F, appearing as page 212 of the 247 page NLA .pdf, is perhaps the clearest indication of Cole’s rationalist view of religion:

We firmly believe that if a number of untutored children were set down in an uninhabited land where they could obtain sustenance, but were entirely isolated from the world, and allowed to multiply and form a new community, that  a religion would spontaneously spring up amongst them as a necessary human product – that in the course of many generations consequent on the use of their perceptive and reflective faculties, a faith would grow up in such a community very like those at present existing upon earth, and shewing like them the signs of human virtues, human passions, human hopes and fears, human prejudices, and particularly human egotisms. And we believe that the sooner this great fact – that the religious opinions of mankind are simply, one and all, emanations from the mind of man – is universally realised, and things are allowed to stand on their proper footing, are called by their proper names, and a fair, intelligent start made towards forming a well-considered, clearly-grounded, universal faith in which all humanity can join, the better for the unity, the peace and progress of the world. For ourselves, so firmly do we feel convinced of this, that while we have breath we are determined, regardless of fear or favour, to do the utmost that in us lies to assist in demonstrating this idea, and impressing it upon the minds of men as the object of all others most worthy of their consideration.

Cole’s next publication is shown below left, dated around 1869, An Essay on the Deluge. After some preliminary comments, Cole says …we cannot believe in the Noachian deluge; and the reasons why we cannot, and to which we now respectfully invite his calm impartial attention are as follows:– The following 31 pages go into a point-by-point analysis of the facts to support his assertion.

A 33 page 306KB .pdf transcript of An Essay on the Deluge is available here.

This is followed by a second subject on pages 35 – 48: Attitude of the Clergy Towards Science.

Below right, is Cole’s next foray into the world of religion with his talk on Spiritualism – a paper before the Melbourne Free Discussion Society, on Sunday evening, July 9th 1871. In his typical rationalist approach he starts the second paragraph on the opening page saying: ... if it [spiritualism] is true, it must be placed upon the scientific basis its adherents claim for it, but if it is false it must be proved so and then relegated to the superstitious past, from whence it sprang. 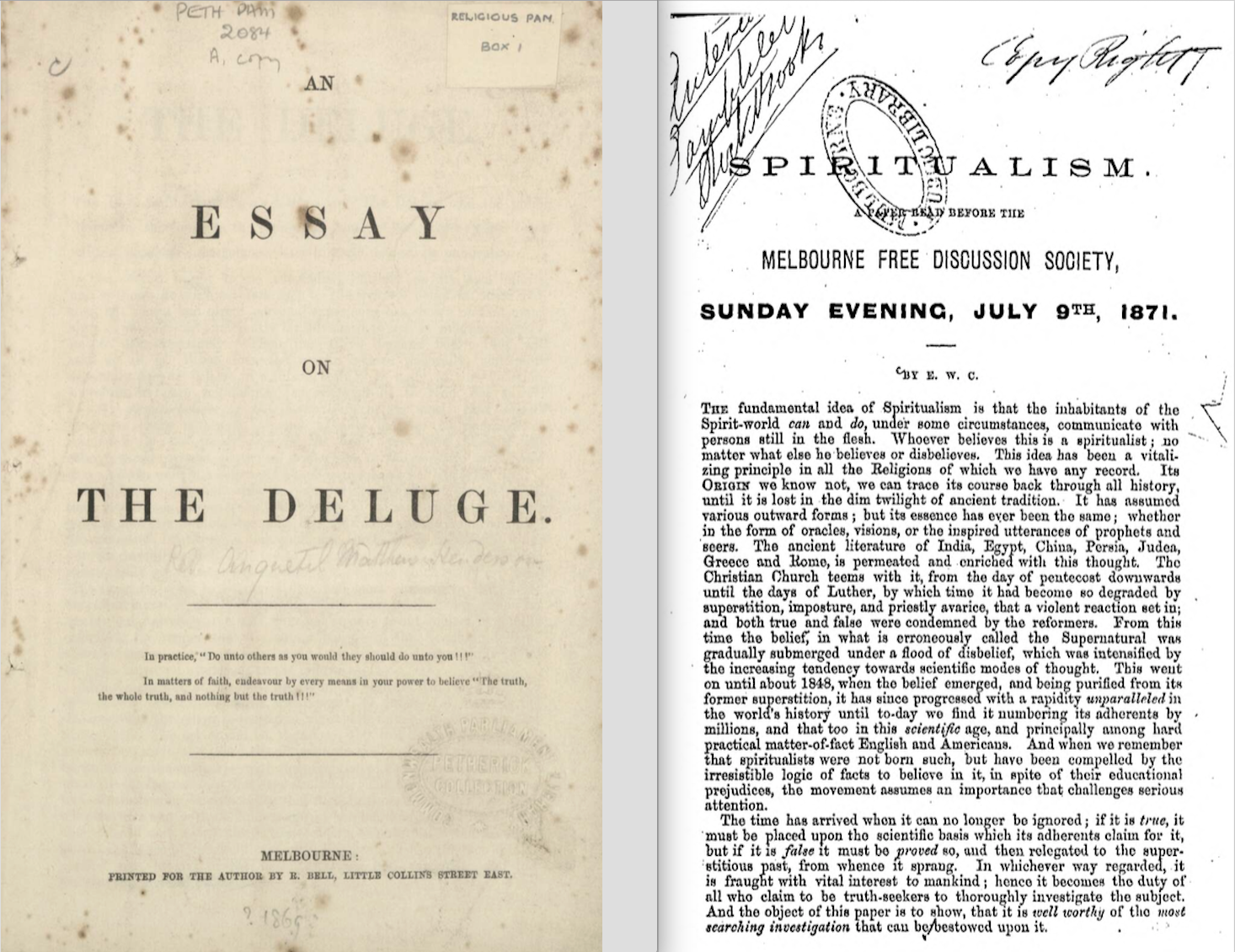 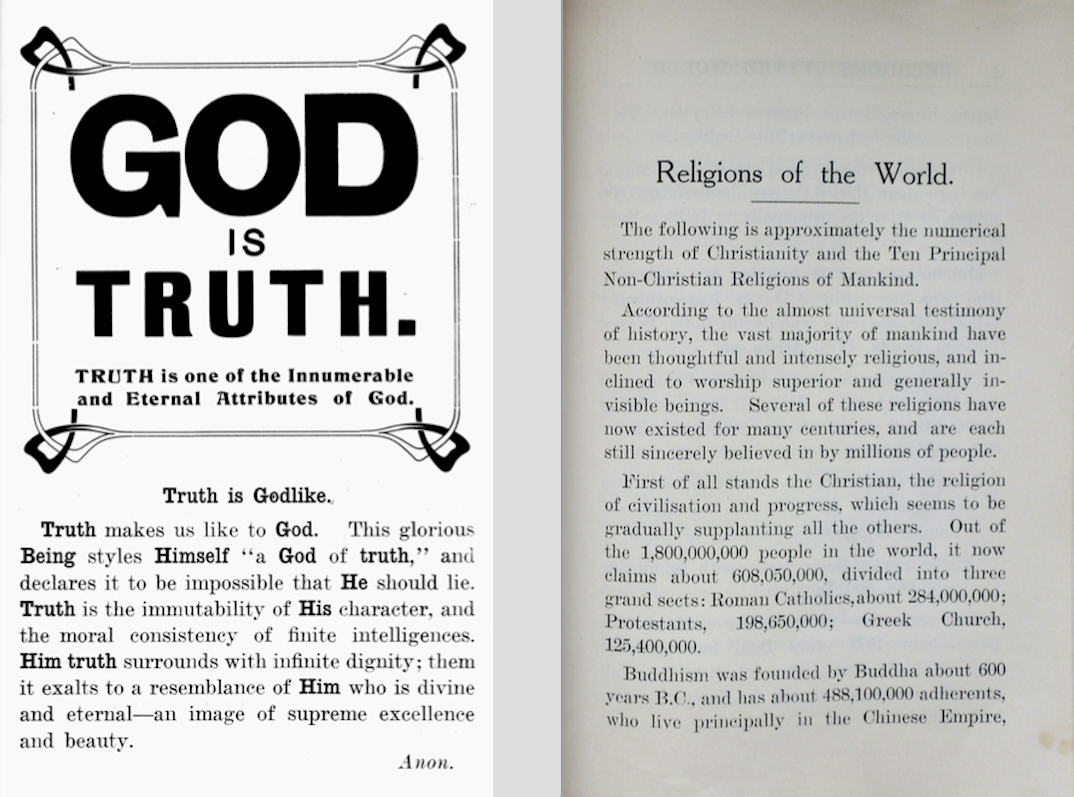 Among papers held by Cole’s daughter, Pearl Adelia, is the following, handwritten in pages of a diary dated March, 1896. The untitled work is written partly in afrikaans and partly in english, and translated, edited and given the title The Dissatisfied Man, the text appears underneath. A 2-page, 3MB .pdf of the images below are available here, and a transcript of the text below as a 26KB single page .pdf is available here. 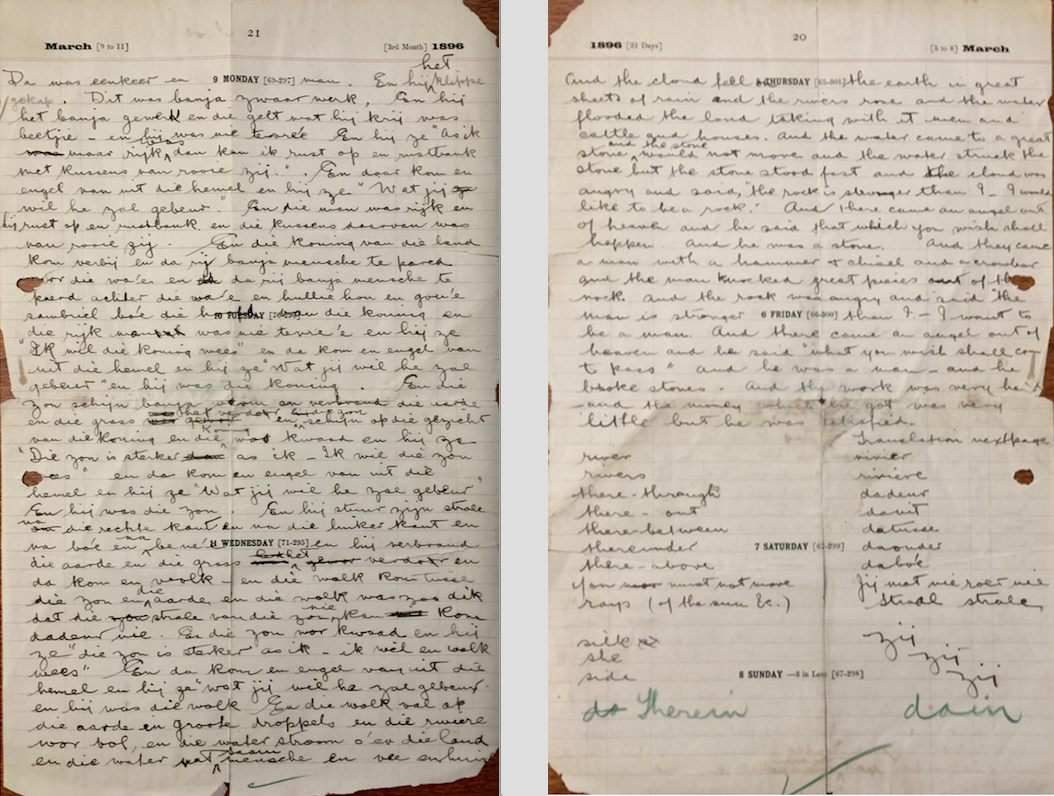 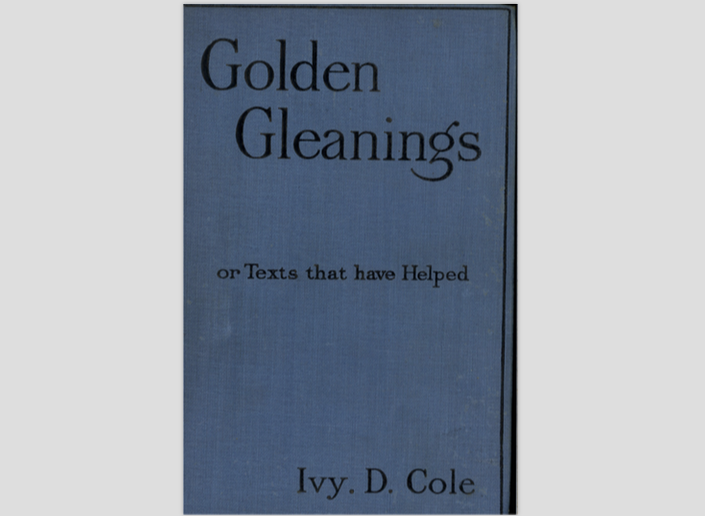 In 1910, Cole’s youngest daughter, Ivy Diamond, continued the family tradition of book publishing and compiled Golden Gleanings, or texts that have Helped. In her preface, Ivy says:
This volume contains 1,146 of the most happifying short texts, quoted in the Bible; besides the 114 texts which were selected by popular vote, in answer to the question, “What biblical verse influenced your life most?” These little texts – which are printed one on a page – have done an immense amount of good by their loving, hope-giving advice and counsel, and in publishing them in this form, I feel sure some weary, worn souls will find in them hope for the future, and happiness during their brief stay on this planet. They  have helped others; brothers and sisters, they will help you too. IVY. D. COLE.

The 240 page book has been digitised by the NLA and the 59MB .pdf file can be accessed here. 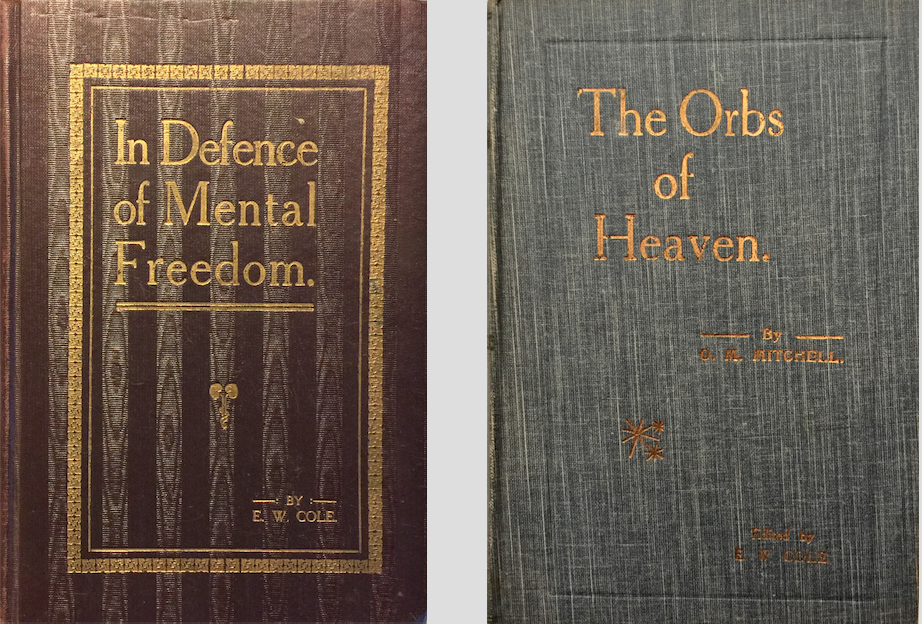 The cover above left is a second edition of In Defence of Mental Freedom published in 1917, following the first edition published 49 years earlier in 1868. At right is an imprinted book The Orbs of Heaven by O. M. Mitchell ‘Edited by E. W. Cole’. Cole wrote the preface describing The present volume contains four of the most interesting and instructive of the lectures delivered by Ormsby McKnight Mitchell, the eminent American Astronomer, and published by him under the title of “The Orbs of Heaven.”