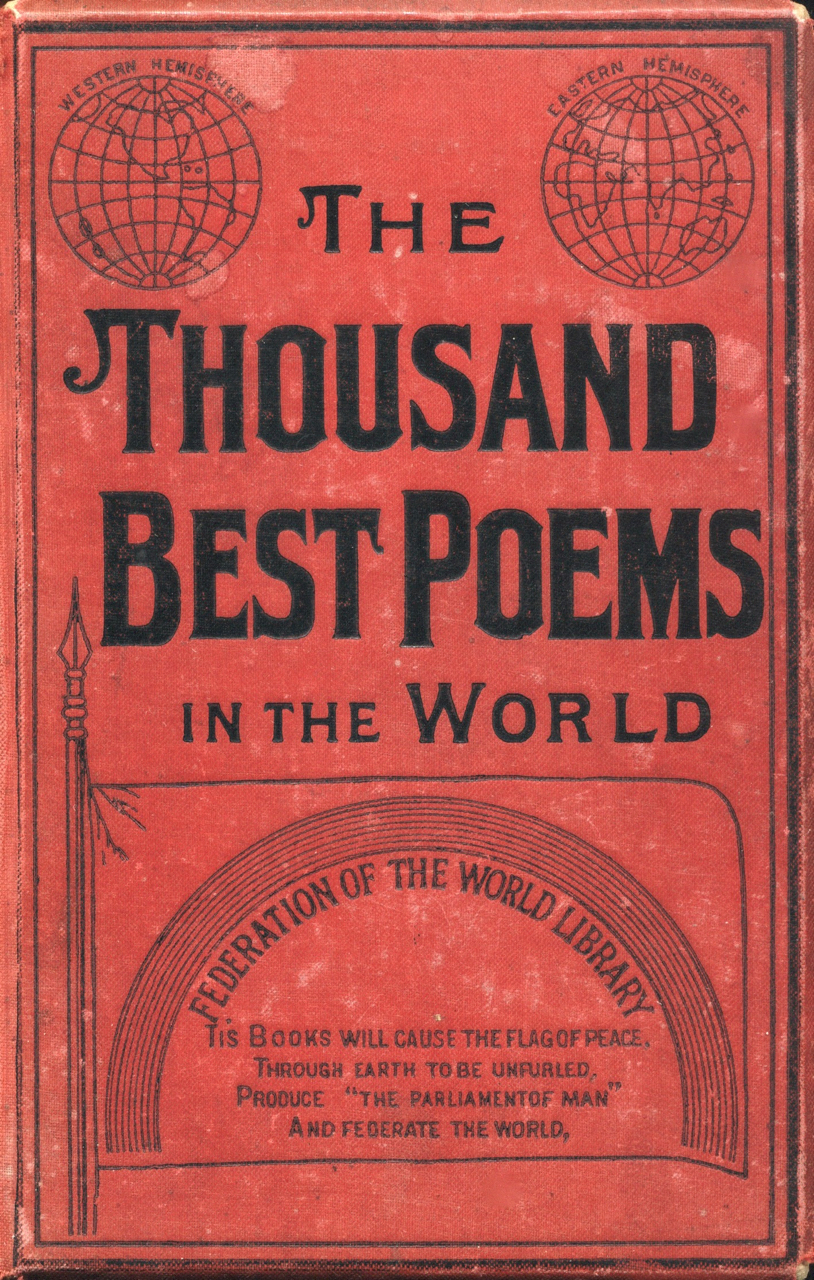 Cole wrote 144 quatrains In Praise of Books. ‘No claim for poetic excellence is put forward for these verses …’ was Cole’s view of his own poetry. It is a thread that runs through Cole’s pragmatic rather than artistic view of poetry.

Cole’s publication of The Thousand Best Poems in the World was part of his Federation of the World Library. The cover is shown at left and was divided into two series of five hundred poems each. The cover of the First Series – Containing Five Hundred Poems is shown below. As with many publications, the page numbering starts again for the second series of five hundred.

A 49 MB .pdf of the introductory pages of this volume are available here. 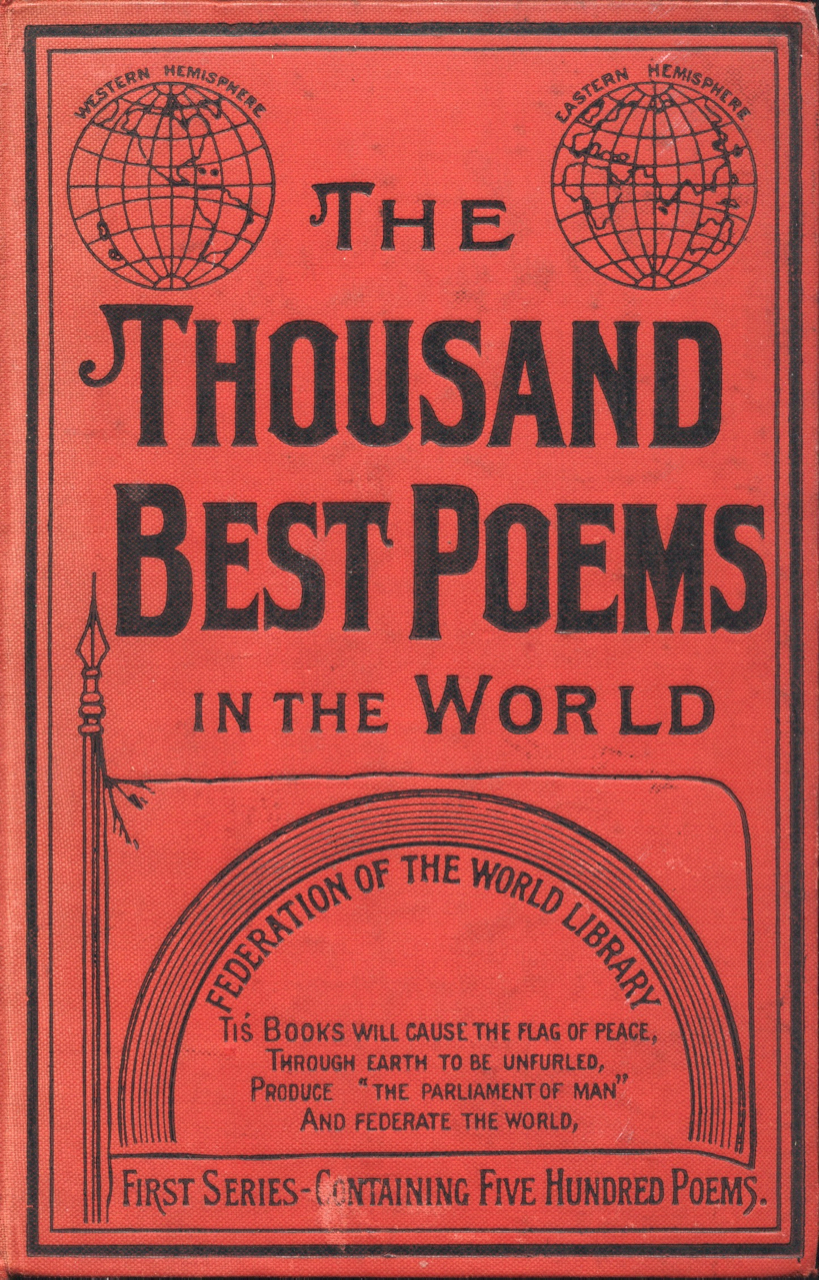 The cover of Cole’s first five hundred poems in
The Thousand Best Poems in the World.

Cole uses the same preface in both publications and gives us an insight to his view of poetry as follows:

This little book of poetry contains fully half of the favourite poetic gems of the world collected together for the first time. Campbell defines poetry as the “Eloquence of Truth.” Shelley defines it as “Man’s best Thoughts, expressed in their best language, in their happiest moments,” and certainly poetry contains the noblest of human thought expressed in the most telling, the most pleasing, and most easily remembered form. All the best poetic gems in the world can be put into a convenient volume, and sold for two or three shillings. Has it not, then, up to the present been a great loss to humanity that this has not been done? If poems containing great and noble truths beautifully expressed exist in the world, surely it is better that every thinking being should have the opportunity of reading them, and anyone collecting them into a convenient form, or even spreading them abroad in any part of the world, when so collected, is really promoting the mental and moral progress, and happiness, of mankind. There is not one person in a thousand that ever read half the poems collected into this small book, and I have no hesitation in saying that if any thoughtful person reads this volume through, small as it is, they will be the happier for it. No thinking person can read these gems from the dozen grand and noble poets of humanity: Burns, Hood, Wordsworth, Mackay, Swain, Sims, Longfellow, Whittier, Lowell, Carleton, Felicia Hemans, and Letitia E. Landon, without being better, wiser, and happier for having done so. [Cole next acknowledges permissions granted from various publishers.]

The pieces in this collection may not all be what a severe critic would call good poetry. I have selected them for their soul-stirring ideas rather than their mere poetic embellishment. A grand idea that produces noble resolves or a humane recital which brings tears of sympathy into the eyes, although given in simple, or even in ungrammatical language, is of far greater value to mankind than volumes, or dozens of volumes, of exquisite obscurities or “sublime nonsense.” It is largely of these simple-touching poems dear to the heart of humanity rather than to the head that this book is composed. It is said by some, and I think rightly, that poetry acts upon human beings with a soothing effect like music. Fuller calls it “music in words.” Certainly the reading of beautiful poems has an intellectually pleasing and soothing effect upon troubled minds. This beneficial effect has been appreciated by millions in the past, and I believe that hundreds of millions in the future will more frequently take up their favourite book of poetry to read themselves, or say to some dear friend in the spirit, if not in the words of one of the best poets of humanity:–

“Come, read to me some poem,
.   Some simple and heartfelt lay,
That shall soothe this restless feeling,
.    And banish the thoughts of day.

Come, read from the treasured volume
The poem of thy choice,
And lend to the rhyme of the poet
The beauty of thy voice.

And the night shall be filled with music,
And the cares that infest the day
Shall fold their tents like the Arabs,
And as silently steal away.”

Between the above preface and the contents page, Cole makes an appeal … 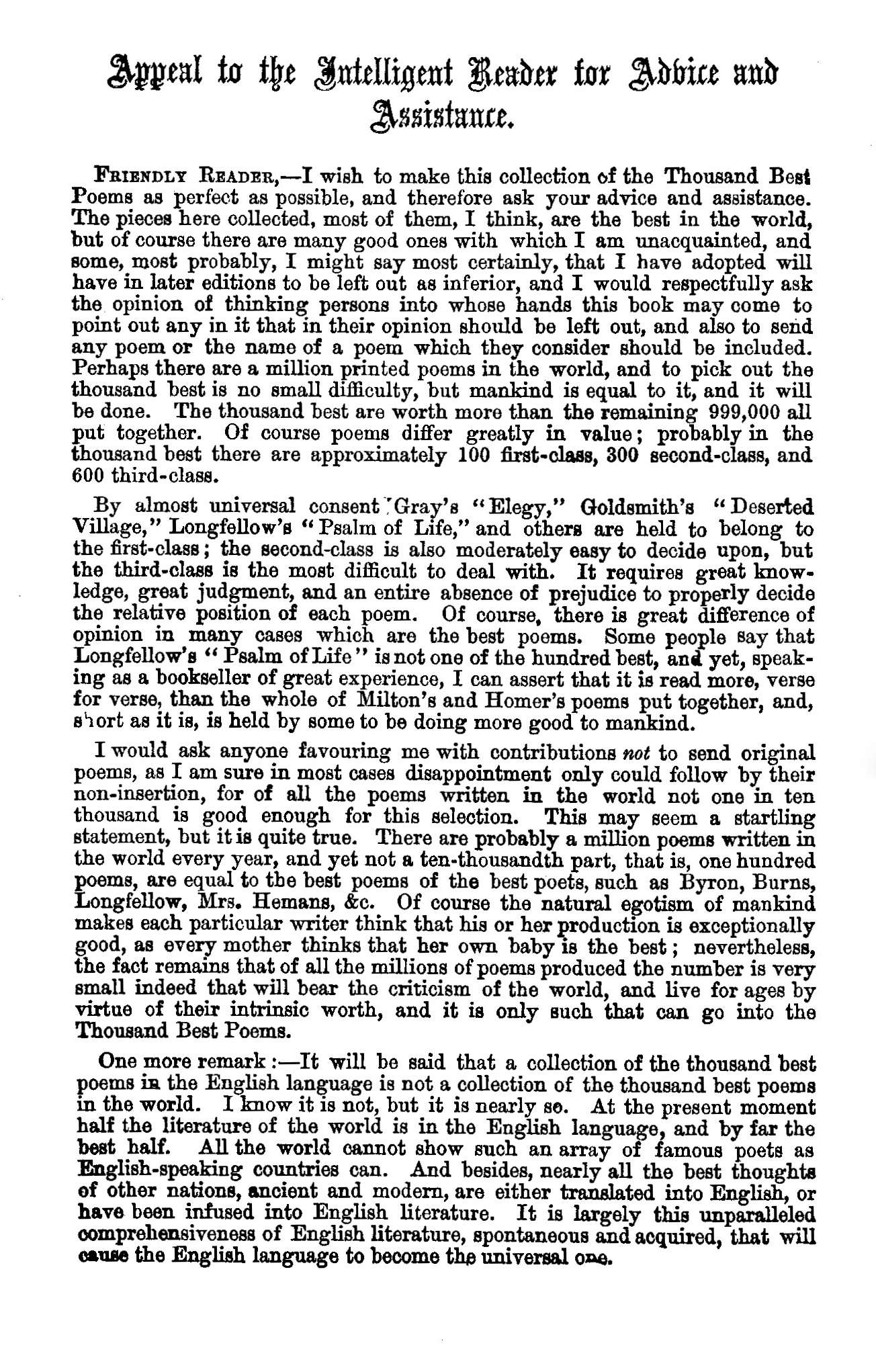