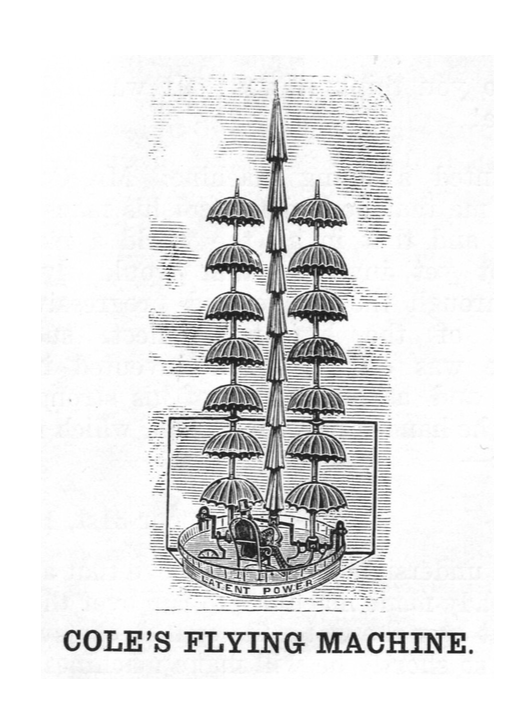 On Friday, February 13th, 1914, on a paddock in the Melbourne suburb of Elsternwick, Cole’s eldest daughter, Linda, climbed aboard a Sopwith Biplane belonging to Mr. Harry Hawker. The event was photographed by Arcade employee Charlie Probert and a series of 8 photographs (from the collection of Rupert Rudd) can be viewed here. The text accompanying the photographs, in Rupert’s handwriting, reads: A series of photographs by Charles Probert taken in February 1914 illustrating the Exhibitions of flying given by Harry Hawker in his Sopwith Biplane at Elsternwick, Victoria.

The event was also covered by the Melbourne Punch who used some of Probert’s images in their issue of Thursday February 19, 1914 on page 297, crediting the photos ‘by C. Probert, Windsor‘ including the following: 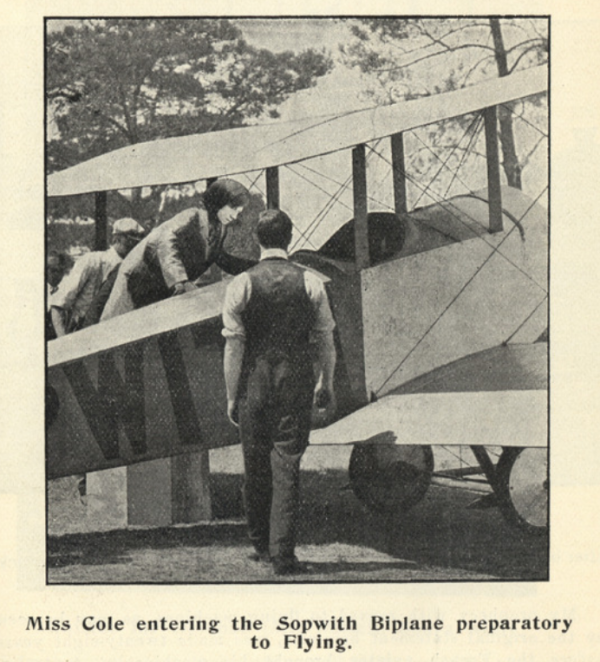 Under the headline AVIATION IN MELBOURNE. PASSENGERS ACCOMPANY HARRY HAWKER TO THE CLOUDS appears the following:

It was Mr. E. W. Cole’s enthusiasm and belief in the ultimate success of aerial navigation that induced Miss Linda Cole to fly with Mr. Hawker, the daring young aviator, at Elsternwick, recently. Miss Cole was perfectly calm and collected when entering the biplane, and showed no signs of “nerviness.” During the flight around St. Kilda, Brighton and Sandringham, and across the waters of Hobson’s Bay, she conversed freely with Mr. Hawker, and commented on the panoramic views which unfolded themselves below. Miss Cole, having heard that Mr. Hawker had some intention of flying on a non-stop journey from Sydney to Melbourne – a distance of 500 miles – was most anxious to accompany him, providing the Sopwith biplane would carry two persons in addition to the tank of petrol which would, of course, be indispensable. Mr. Hawker, however, says he would not take a passenger should he undertake the journey. Miss Cole is most anxious for another sea flight, as she is of the opinion that the power to see through the water to the bottom of the ocean is one of the utmost importance, as it would in warfare enable aviators to locate with accuracy mines in harbours and any other submerged dangers. Her most ardent wish is to become a lady aviator, and she is contemplating a trip to Europe to obtain up-to-date instruction in the aerial art.

In the next paragraph, Punch published a letter from Cole as ‘an extract from a work published in 1882′ (bold type below added):

I, the undersigned, firmly believe that as man has already made machines to run over the land and float over the water faster than the swiftest animal, so shortly he will make machines to fly through the air as fast, and finally faster, than the swiftest birds do now. And I hereby offer a bonus of £1000 to any person who shall (in consequence of said bonus) within the next two years, invent a flying machine, to go by Electrical, Chemical, Mechanical, or any other means, except by gas, a distance of 100 miles, and shall come and stop in front of the Book Arcade, Bourke-street, Melbourne, Australia, as easily and safely as a carriage stops there now.

Two weeks later, on Thursday March 5, 1914, Punch published follow up articles on page 378 and page 379 which included the following from Cole appearing at the upper left corner of page 378: 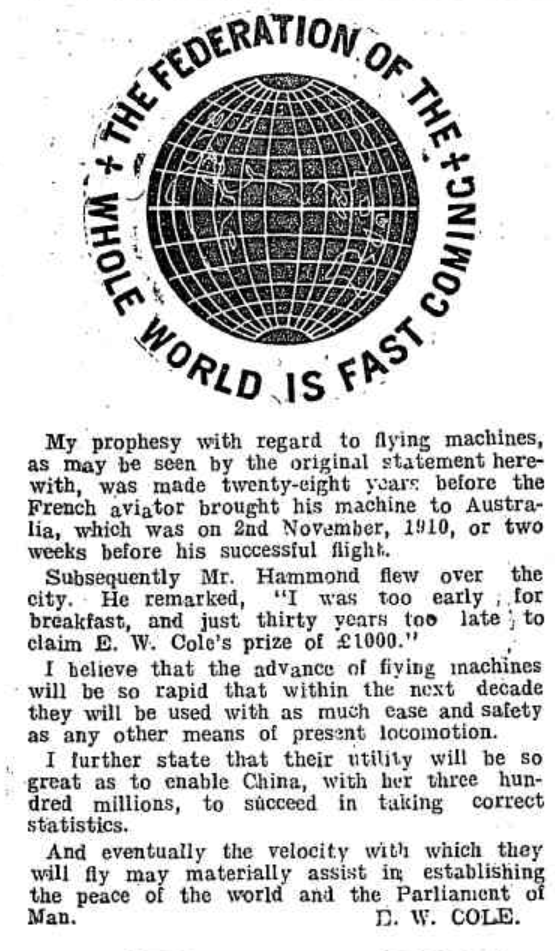 The dominant feature of Punch’s double-page spread was A Wonderful Search Journey by the 40 Principal Modes of Travelling in the World and a Prize of £1,000 offered for a Flying Machine. An Imaginary Story and a Wonderful Prophecy. The first lines give us an insight into Cole’s modus operandi:

I have always been a man of one idea at a time, and that one idea I have followed with unwavering determination until success has rewarded my efforts.

Both the press account of Miss Linda Cole: Her First Aerial Flight and the Wonderful Search Journey were reproduced as is part of the Selected Works of E. W. Cole – Part III. Cole is the only acknowledged author, but the works were undoubtedly compiled and published by Cole colleague, Henry Williams. The Wonderful Search Journey appears on pages 61 – 80 of this book and  Miss Linda Cole: her First Aerial Flight appears on pages 81 – 86. The entire book has been digitised by the National Library of Australia (cdc-10739074) and the full 474 page (127MB) file is available to view or download here.

Both these sections have also been transcribed and can be viewed separately – a 16 page (24MB) .pdf of the Wonderful Search Journey is available here and a 4 page (2.4MB) transcript of Miss Linda Cole: Her First Aerial Flight is available here. 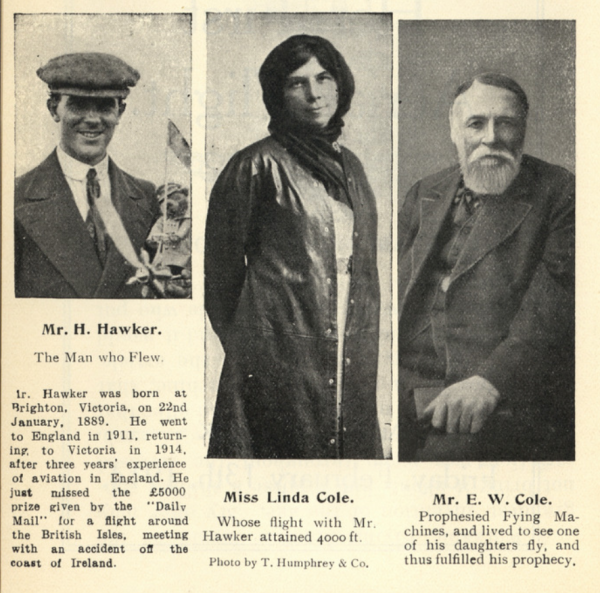 Cole also felt his £1,000 offer would probably not be claimed and made the following suggestion:

A workable Flying Machine would be the grandest invention of the age. My offer may not bring it about; but suppose a shilling subscription was made throughout the civilised world; say twenty million people gave 1/- each, that would be one million pounds, and offer that as a bonus for a useful flying machine, that bonus, I am sure, would produce the article. The shillings would be well spent, and it would immortalise the twenty million people who put their names down. 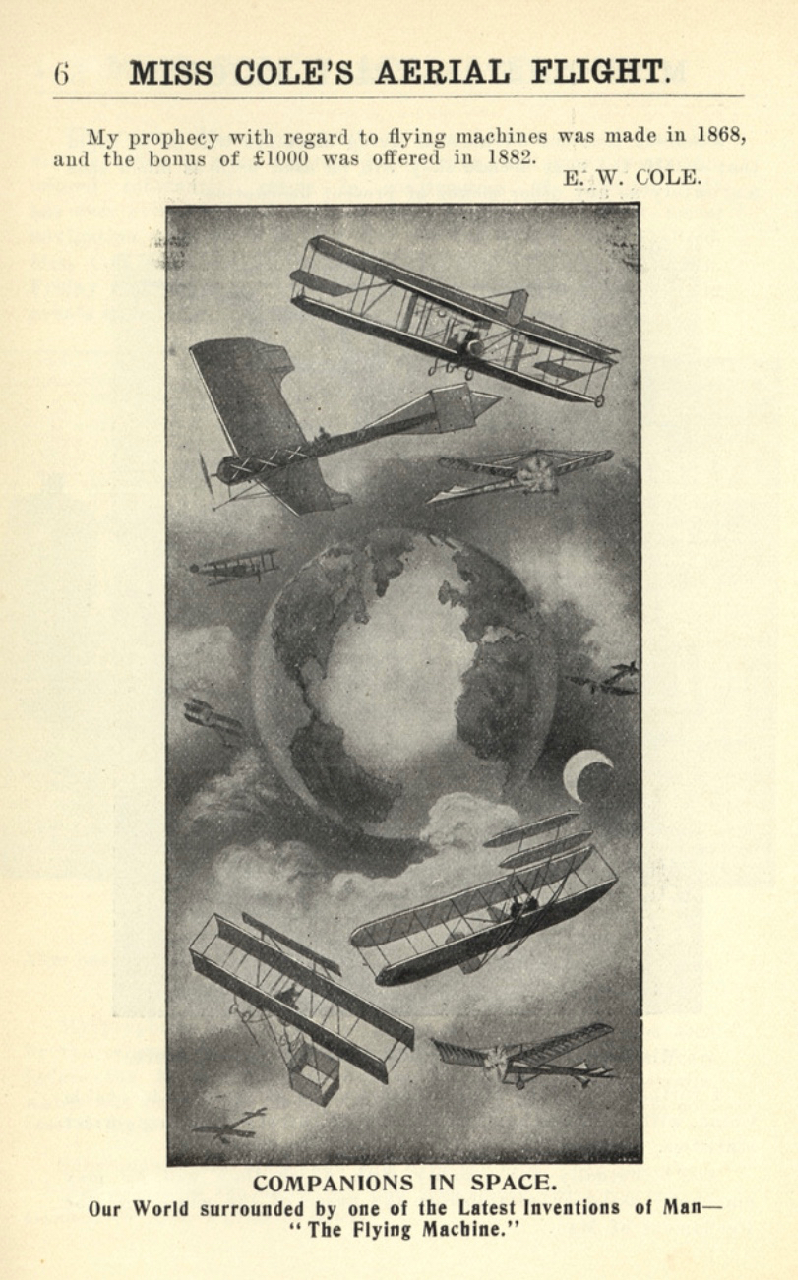 Cole became aware of, and an enthusiastic supporter of, a new innovation in aircraft manufacture – aluminium. Cole believed that universal education, spread by the ever-increasing availability of books, would result in the Federation of the World.  He believed aeroplanes would play a major role in this dissemination. These two passions were, quite literally, both sides of the same coin, stamped out of aluminium:

This token is catalogued as D85 by George Dean in his book. Please see Tokens in the Main Menu for all other Cole tokens.