In the publication at left, Cole prefaces the subject as follows:

Reader,
The following account of the apple was not written for this book, but for the one entitled, “ The Lies We Tell and the Beauty of Truth,” in which it was given as a fair specimen of the histories of mankind. But, as it is suitable to my argument in favour of the exceeding value of good apples, it is given here. The first few pages, like most histories, is a mixture of truth, falsehood, and absurdities, and written to satirize such histories; but the remainder of it contains the best information I have been able to get about the apple. And my argu­ment here is to magnify the great value of apples as a healthy food, as a gentle medicine, and as a substitute, more or less, for the poisonous, demoralizing, degenerat­ing, and death-dealing tobacco-plant, and to encourage the extensive growing and preserving of good, tasty, juicy apples, in such quantities that they can be obtained all the year round everywhere where tobacco can be obtained, and so bring them within the reach of every person. I would particularly call the reader’s attention to pages 51 and 52, about “Apple Clubs” and “Apple Missionaries” in America.

Introducing his history, he goes on:

A Piece of History Far More True than the Average of Histories.

Everything in the world has its history, whether it be man, beast, bird, fish, reptile, insect; whether it be money, metal, mushroom, melon, marshmallow or marlinspike; whether it be animal, vegetable, mineral, spiritual, or whatever it be. In fact, all the millions and billions of objects in the universe, every kind of them and every single one of them, has its own peculiar history. Every­thing within the cognizance of man has to him its history; generally, if not always, a mixture of the true and the false.

As an illustration of how mixed are tho histories of most things, I propose to give the history of the apple from legend, myth, hearsay, and written records, more or less reliable.

Contrary to the average of the whole history of most things from the earliest times until now, I shall put into this history more than half that is true, and which is generally instructive and useful knowledge. I would not stake my existence upon the statement that more than half of it is true, but I will aver that, as a whole, it has far more truth in it than most histories where the ancient and modern information is combined. I may rather astonish the reader by the useful information and advice which I give about the great value of the apple and its culture, but all information and advice and statement of every kind which I have given, is absolute history.

This is the contents page of the publication: 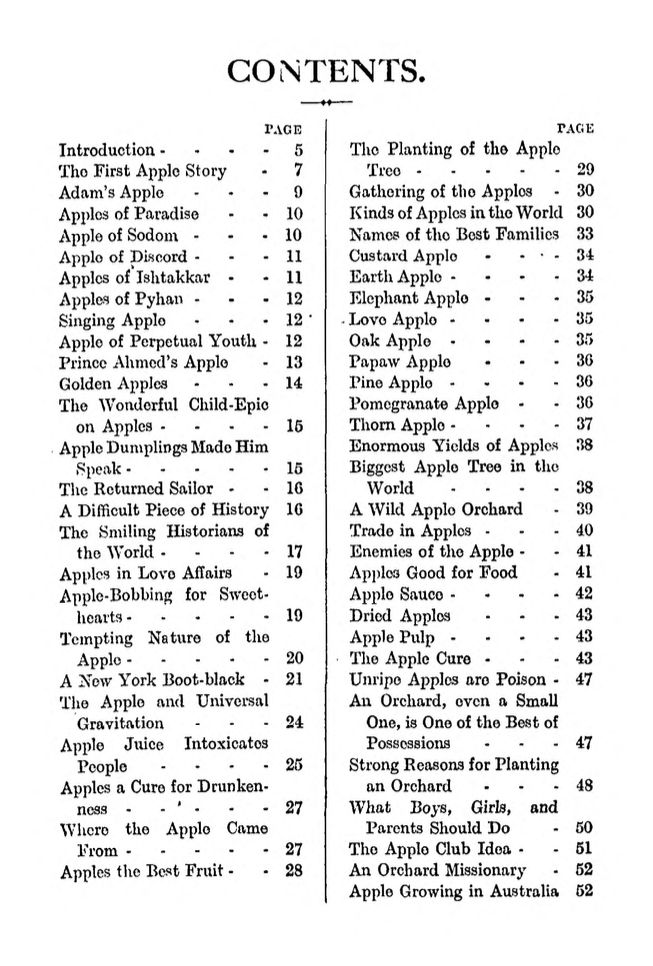 The full 54 page 16MB publication from the State Library of Victoria is available here.

The subject was also included in Cole’s Selected Works Part III, as item 8. The volume has been digitised by the National Library of Australia (cdc-10739074) and the whole 474 page 127MB file can be viewed or downloaded here. Item 8 appears on pages 215 – 274.

Item 8 has also been transcribed and the 29 page 44MB file can be accessed here.

Cole also directly addressed his belief in the ability of apples to replace tobacco smoking.

Cole introduces this subject as follows. It is interesting to note that Cole must have suffered kidney problems as in the last paragraph he ‘can bear grateful testimony to its great efficacy’:

It is difficult to do away with a habit, especially an extensive, deep-seated and fascinating one like the tobacco habit. But, sometimes, a habit can be changed easier than annihilated. Some people say, “If you take away at my present habit, which brings me pleasure and comfort, what will you give me in its place?” Some time ago, a gentleman strongly advised his friend to give up smoking; the friend queried, “What other vice do you advise me to adopt instead of it?” Now, in the following eight pages, I shall argue in favour of the substitution, or partial substitution, of a good habit for a bad one, namely, the habit of apple-eating for the habit of tobacco-using. There are various reasons why people use tobacco; the principal one is to make themselves feel more comfortable. A man feels a little off, or a little uncomfortable, and thinks that he would like to eat something, drink something, or take a smoke; in most cases his blood is stagnant and he wants something to set its circulating. Now, many things will do this: eating, drinking, smoking, snuffing, walking, riding, cycling, talking, laughing, reading, writing, etc. Perhaps the most common way in the world now is to smoke tobacco. I believe the best, in the way of taking something, would be to eat some tasty fruit, particularly good apples, the best fruit in the world; this would be a great improvement on smoking, chewing, or snuffing tobacco. Good apples are a delicious health-giving food, while tobacco is not a food but a disease-giving, offence-giving, and demoralizing poison. The daily eating of good apples regulates the system and cures or alleviates many complaints; the whole medical world agrees in this.

Dr. G.R. Searles, of Brooklyn, New York, says, “The apple is an excellent brain food, because it has more phosphoric acid in easily digestible shape than other fruits. It excites the action of the liver, promotes sound and healthy sleep, and thoroughly disinfects the mouth. This is not all. The apple helps the kidney secretions and prevents calculus growths, while it obviates indigestion, and is one of the best preventives of disease of the throat. Everybody should be familiar with such knowledge.”

With respect to kidney trouble, I can bear grateful testimony to its great efficacy, and would advise all, who suffer at any time from stoppage, to try the eating of apples, baked, boiled, all raw. The malic acid in them seems to be a most effective specific for it.

The Uses and Curse of Tobacco appears immediately after The History of the Apple in Selected Works Part III and appears as Item 9 on pages 275 – 282.

This item has also been transcribed and the 3 page 6MB document is available here.