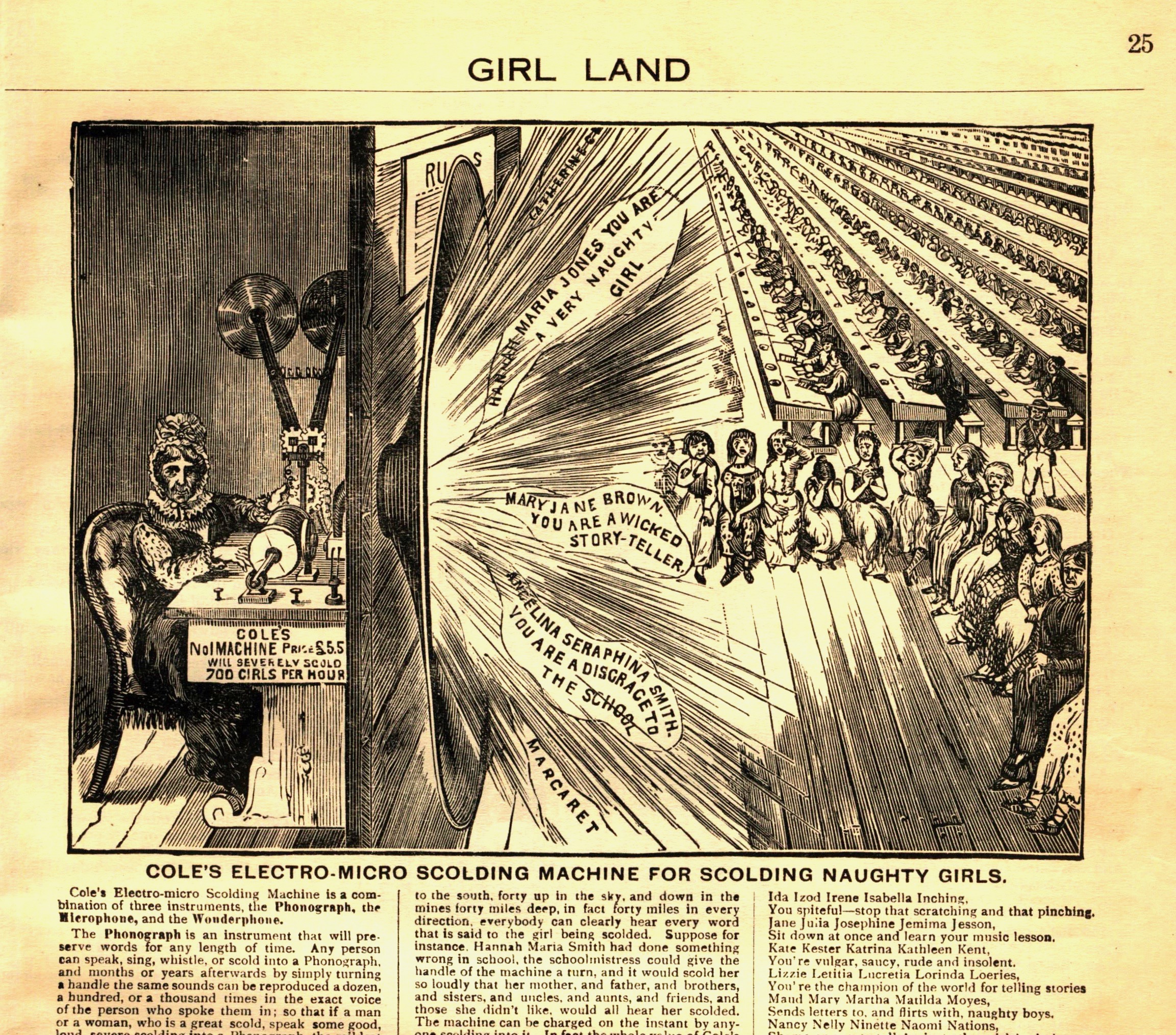 I have tried to make it a book that the prattling infant – the five- year-old — the ten-year-old – the twenty-year-old, and the fifty- year-old, will alike be interested in, delighted with, and instructed by: and I have no hesitation in saying, that taking into consideration the favourite character of some parts, and the intrinsic worth of other parts, that it is one of the best books, and is certainly the CHEAPEST CHILD’S PICTURE BOOK in the WORLD, or that ever was in the world.

No copies of the First Edition are known to exist, but the NLA have digitised an early edition (nla.obj-281528762) and the 89 page, 17MB file is available here. The image at left of Cole’s Electro-Micro Scolding Machine for Scolding Naughty Girls appears on page 50, although the image used here is taken from page 25 of Cole’s Girl Land. Always one to see a silver lining, Cole goes on to explain:

One great advantage of the Electro-micro Scolding Machine is, that after it has been in use for a short time the girls will all have been shamed into good behaviour; but the Machine will not become useless, as it can, without a farthing outlay, be turned into a Praising Machine, for it can be made to praise in a gentle voice as well as scold in a harsh one. In fact, as said above, it will repeat in exact tones, anything that is recited, preached, sung, whistled, whispered, shouted, scolded or praised into it – and any of which will be heard forty miles around. 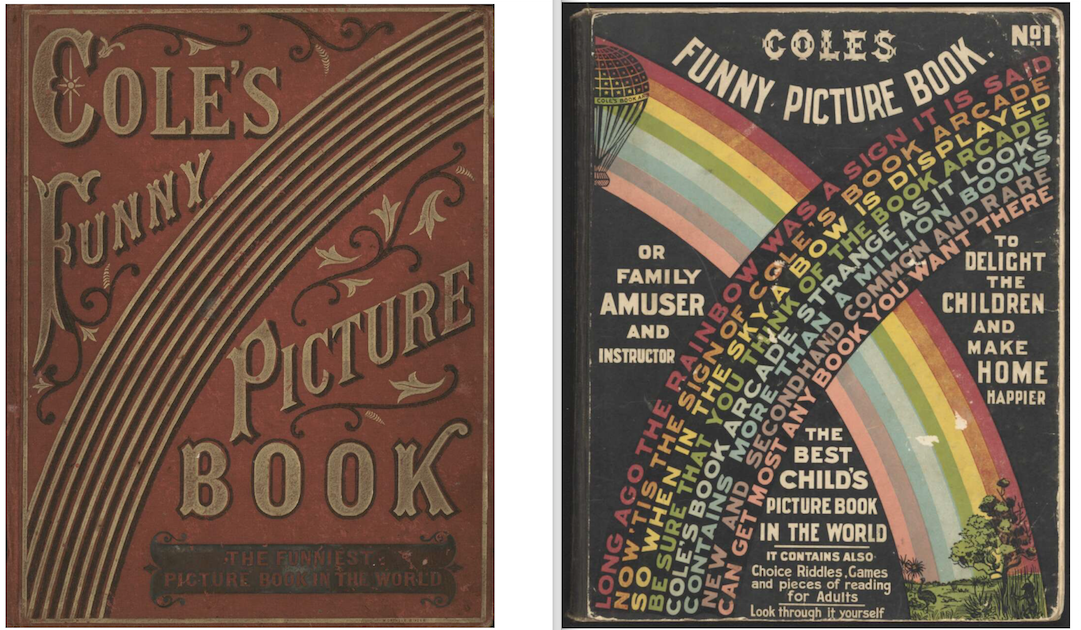 Front covers of both early and 48th Edition from NLA files referred to above.

On March 26, 1929, the Melbourne Age reported that: Yesterday the only remaining portion of the historic Cole’s Book-arcade was disposed of. The goodwill, trade name, trademark, rights, stock and fittings were purchased for £2400 by a syndicate in which the main people concerned were Mr. A.F. Turnley, a son-in-law of the founder (Mr. E. W. Cole), and Mr. Val Cole, a son. (See Chronology items 383 – 4.)

Turnley’s son, Edward Cole Turnley, would continue publication and in 1974 wrote a biography of Cole – Cole of the Book Arcade (see Biographical section).

While all the above publications are intended for children, Cole’s Fun Doctor was aimed at adults. Cole believed in a Federation of the World Series of publications: The object of the Series is to collect together a gem volume of every popular subject from the literature of the world so as to form a cheap and convenient library to bring within the reach of everyone. Life is too short for any of us, to read all the books, so let us get a little of the cream. The merest accident decided that the fun volume was the first one.

Cole outlines his view of the value of laughter in the Preface, and goes on to include Twenty-Five Other Testimonials to the Laugh Cure. Fun is Better than Physic and More Pleasant to Take. 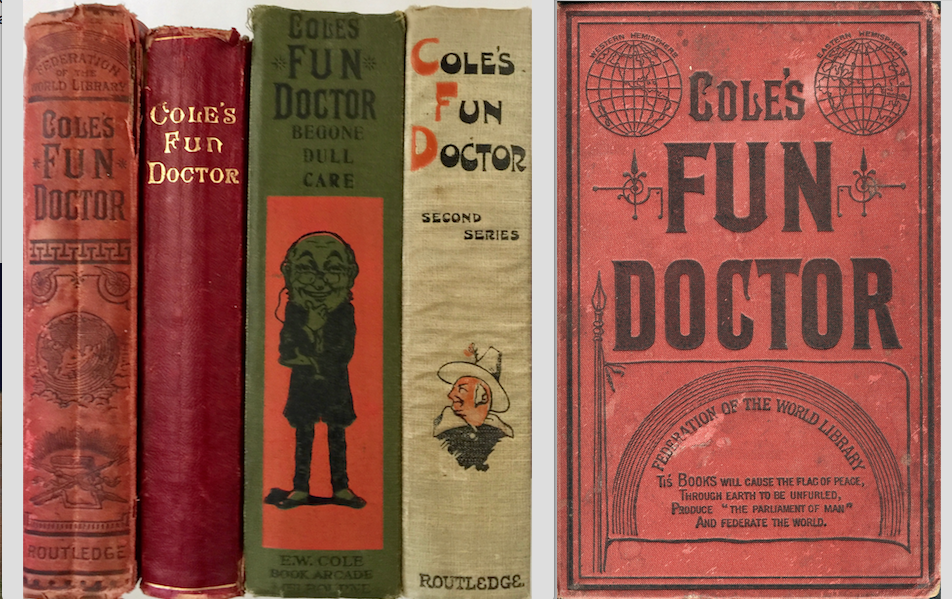 The spine of the original Federation of the World Library Fun Doctor is shown at left and the front cover at right. The other three spines are a gilt version of the original plus Series One and Series Two issued posthumously.

Cole also issued an abridged version of the Fun Doctor – one under the title 200 Gems of Fun and the same content under the title The Funniest Book But One. The latter has been digitised by the State Library of Victoria and the 4MB 190 page .pdf is available  here. 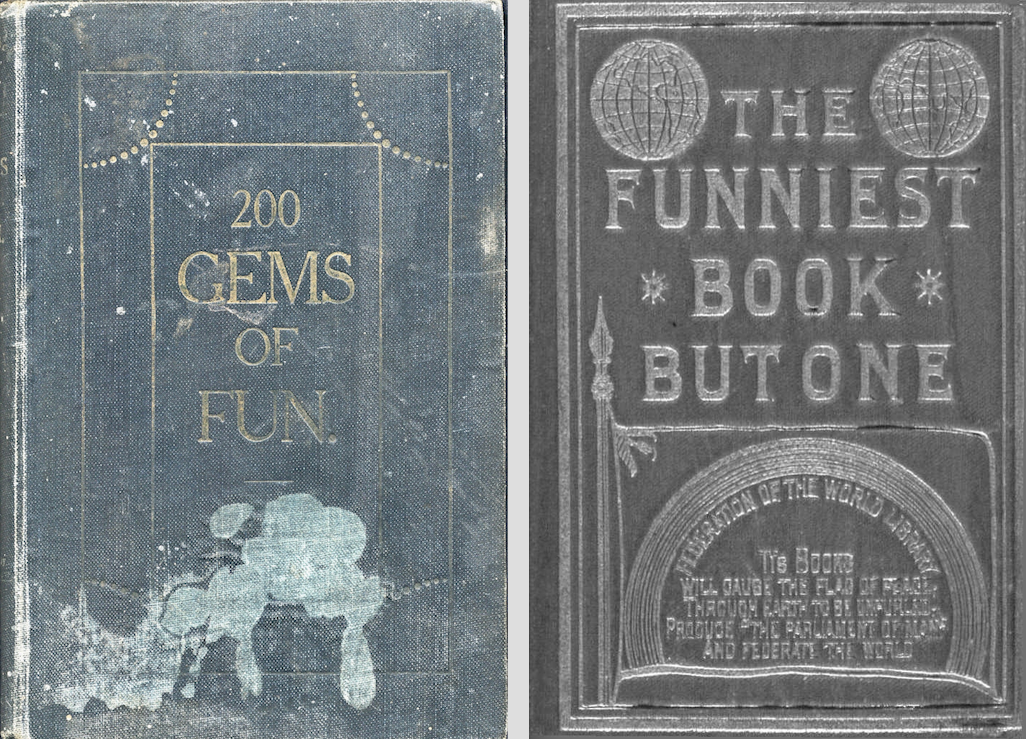 In his Fun Doctress, Cole’s dedication is to the DEAR LADIES, and secondly to everyone who can give a good broad smile without laughing, or a good hearty laugh without smiling – Reader try to do both either before company or a looking glass, and your face will become instantly brighter and your whole being happier – try it!

An 86MB 110 page .pdf prepared by the NLA is available here. 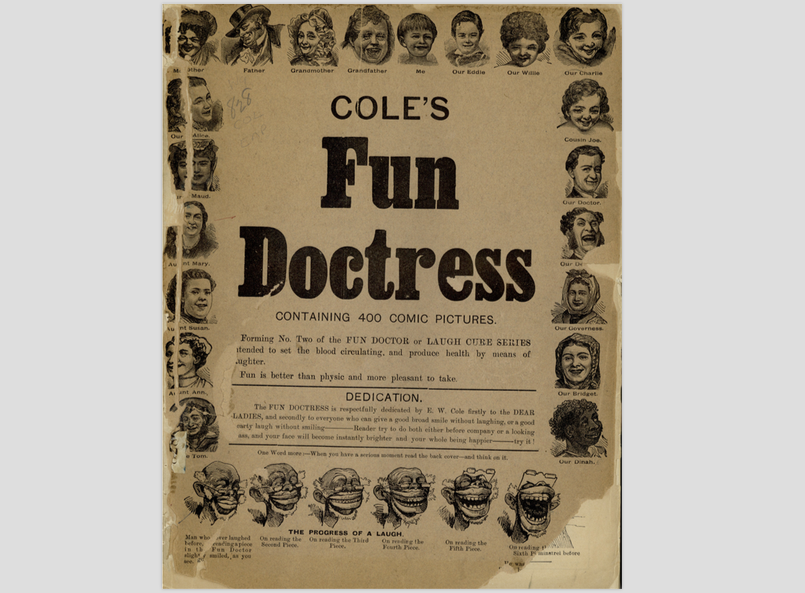 Cole’s Intellect Sharpener and Family Amuser contains 2,000 Choice Riddles and 500 Amusing Puzzles and Games. In the Preface, Cole gives 8 reasons why he feels this publication is not only engaging, but useful (a transcription of the full text of Cole’s Preface as a .pdf is available at this link). 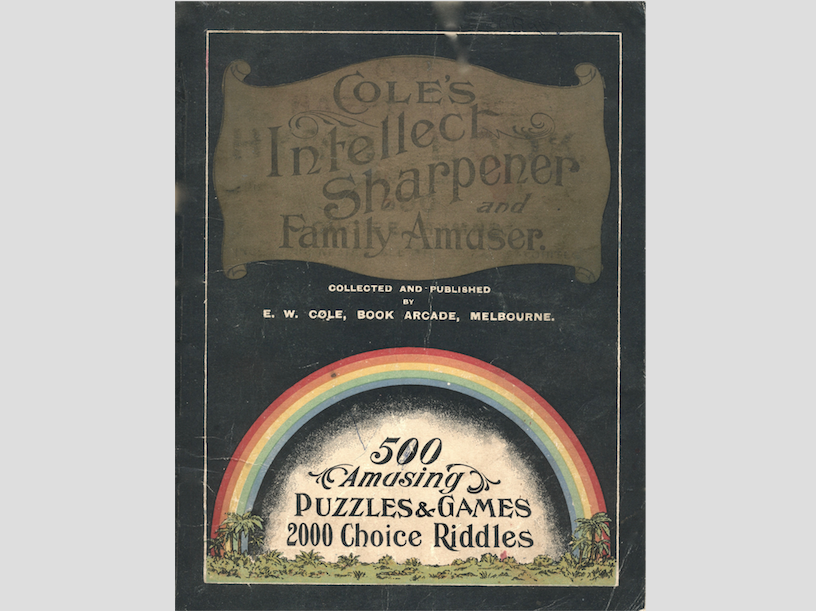 Account of a Race of Human Beings with Tails

On Saturday August 23, 1873, the last column of page 1 of the Herald  was headed ‘Discovery of a race of Human Beings with Tails.’ The column then went on to explain that: ‘Many eminent scientific men have inclined to the belief that human beings in the long past were possessed of tails, good respectable tails, and not the stumpy apology for one which man now possesses.’ The discovery by Mr. Jones, in New Guinea, is then described in great detail in tight copy till the end of the column promised … ‘(To be continued in Monday’s issue.)‘ (See Chronology item #17.)

In the words of Cole biographer Cole Turnley (page 38) ‘Was it some advertising stunt? Or had a most amazing and intriguing anthropological discovery been made? That’s what Melbourne’s relaxing, Saturday evening public were asking each other.’

Whatever the answer, Melbourne readers of the Herald were hooked. It is reported that the Monday issue was sold out  – perhaps the only time in history that an advertisement had sold out an issue of a newspaper (see Chronology item #18 for the follow up advertisement). Detailed follow-ups to Mr. Jones’s discoveries appeared in the Herald the following Thursday, Saturday and Monday. (See Chronology items #19, #20 and #21.)

Cole Turnley continues: ‘There were probably few Melburnians who remained credulous … but most were extremely curious just what form the eventual denouement would take. And Melbourne’s laugh was full of goodwill, despite the atrocity of the pun, when the brief final episode reported Mr. Jones’s conclusion that the Elocweans, in possessing another important organ, were the most happy in the world, and that it was best for man to have a tail. And the column continued: ‘E. W. Cole, 1 Eastern Market, perfectly agrees with Mr. Jones and begs particularly, earnestly, and most affectionately to inform the tailless inhabitants of Melbourne that he has for sale a great variety of TALES.’

A transcription of a 5 ‘episodes’ is available as a 17 page, 137KB .pdf here. Cole also reproduced the series in a 34 page booklet and the 609KB .pdf, courtesy of the State Library of Victoria, is available here. 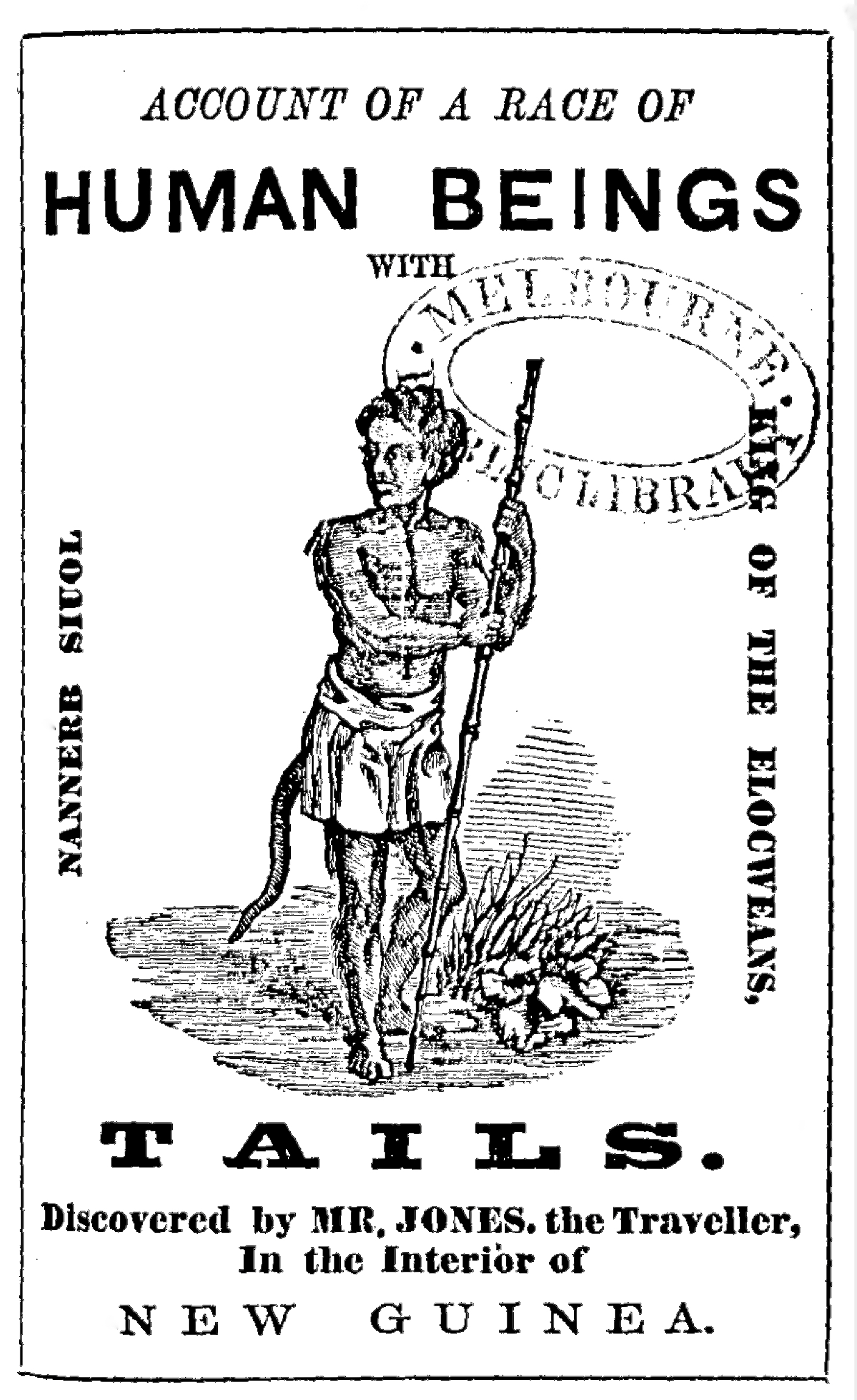 Front cover of the 34 page booklet Account of a Race of Human Beings with Tails, courtesy of the State Library of Victoria.

Cole went on to produce a second series of 5 episodes featuring the launch and promotion of the ‘Caudo-Homo Search and Exhibition Company.‘ These are available for viewing at Chronology items #27, #28, #29, #30 and #31. A transcript of all 5 is available as a 20 page, 190KB .pdf here.

Even while adopting a humorous approach to generating business for his fledgling book business, he demonstrated a deeper intention behind his activities. On the inside back cover of the above 34 page booklet he says:

In Vindication of Tale Reading.
Many good people hold that light-reading is pernicious, and ought to be discouraged. I, from taste, am not a reader of fiction, yet think that such reading, with all its abuses, is on the whole more beneficial, and brings far more real good to mankind than evil, and for the following reasons:-
Ist. Tales almost invariably in the persons of their various characters inculcate virtue and denounce vice. Inhumanity, hypocrisy, and all wrongdoing are generally held up to reprobation and scorn, and virtue in all its various aspects commended and rewarded.
2nd. Tales have done, and are doing, an immense amount of good by exposing to the mass of the people, and thereby bringing about, by the force of public opinion, the reformation of, many and great abuses, such as that of American slavery by “Uncle Tom’s Cabin:” of private mad-houses by “Valentine Vox;” of Yorkshire schools by “Nicholas Nickleby;” of absurd marriage laws by “Man and Wife;” of the iniquities of prison discipline by “It’s Never Too Late to Mend,” &c.
3rd. Mankind will have excitements, and it is far better that the vacant or troubled mind should enjoy the excitement got from tales than that from intoxicating drinks, gambling, larrikinising, &c.
4th. Tales have an immense educating power in giving a person a great knowledge of and command of language, making him acquainted with a thousand interwoven facts, and also with real life in all its aspects as portrayed by observant and talented authors. Many will read an interesting tale when they will read nothing else, and gain knowledge perforce in following amusement – the interest of the tale serving as it were a coat of sugar round the pill. If there is a royal road to knowledge, it is the varied knowledge acquired by reading instinctive and fascinating tales.
And lastly, on the ground that one of the main objects of man’s existence on earth is to make himself innocently happy, from a pure humanitarian point of view then I hold that tale-reading is justifiable, and even commendable; for what a vast amount of harmless mental pleasure has accrued to millions of our race from the reading of “Robinson Crusoe,” “Pickwick,” and “Handy Andy” alone, besides that gained from the multitudes of other tales.
For these and other cogent reasons I, EDWARD WILLIAM COLE, 158 Bourke-st. East, Melbourne, shall continue to Sell Tales to all who are willing to buy them of me.

Cole believed that engagement was the key to education, rather than formal lessons. The term was coined by Friedrich Froebel in 1840 and adopted by Cole.Inserted into his book Hobbies, Cole explains kindergarten learning as follows:

Many a time when I have seen a little child enjoying itself I had reflected to myself – “Ah, my little dear! you are happy now; but your near future will not be so happy, for shortly you will have to begin the usual brain-racking school work which will needlessly embitter all your youthful years!” Of late years the application of the Kindergarten principal has done much to lessen the miserable mental strain in the education of children; and the principle of developing the tastes and capacities of the different pupils instead of forcing them to learn that which, by nature, they are unsuited, will do much more in this direction. Learning could, and should, be made a pleasure instead of a torture, almost as much as the learning of all kinds of games is. As we are now instituting “pleasant Sunday afternoons” for adults, we should institute both pleasant-learning forenoons and afternoons for children, and those teachers who strive to carry out this pleasant and effective principle in teaching will do a great deal of good work for poor, mentally-tortured, juvenile humanity.

A sample of 3 of Cole’s Kindergarten booklets are included here and are available to view or download at the following links:

In the Preface to this publication Cole wrote: If a true, concise epitome of the lives of men and women were written on their tombstones, not by their eulogistic and sorrowing friends, but from the book of the Recording Angel, or from the memory-tables of the departed themselves, how interesting and instructive it would be to go into a cemetery to read and meditate. Reader, under such a system, what would go on your gravestone and mine? I surmise the records would be more mixed than such records usually are. E. W.COLE.

A 3MB .pdf of the 67 page publication is available here. 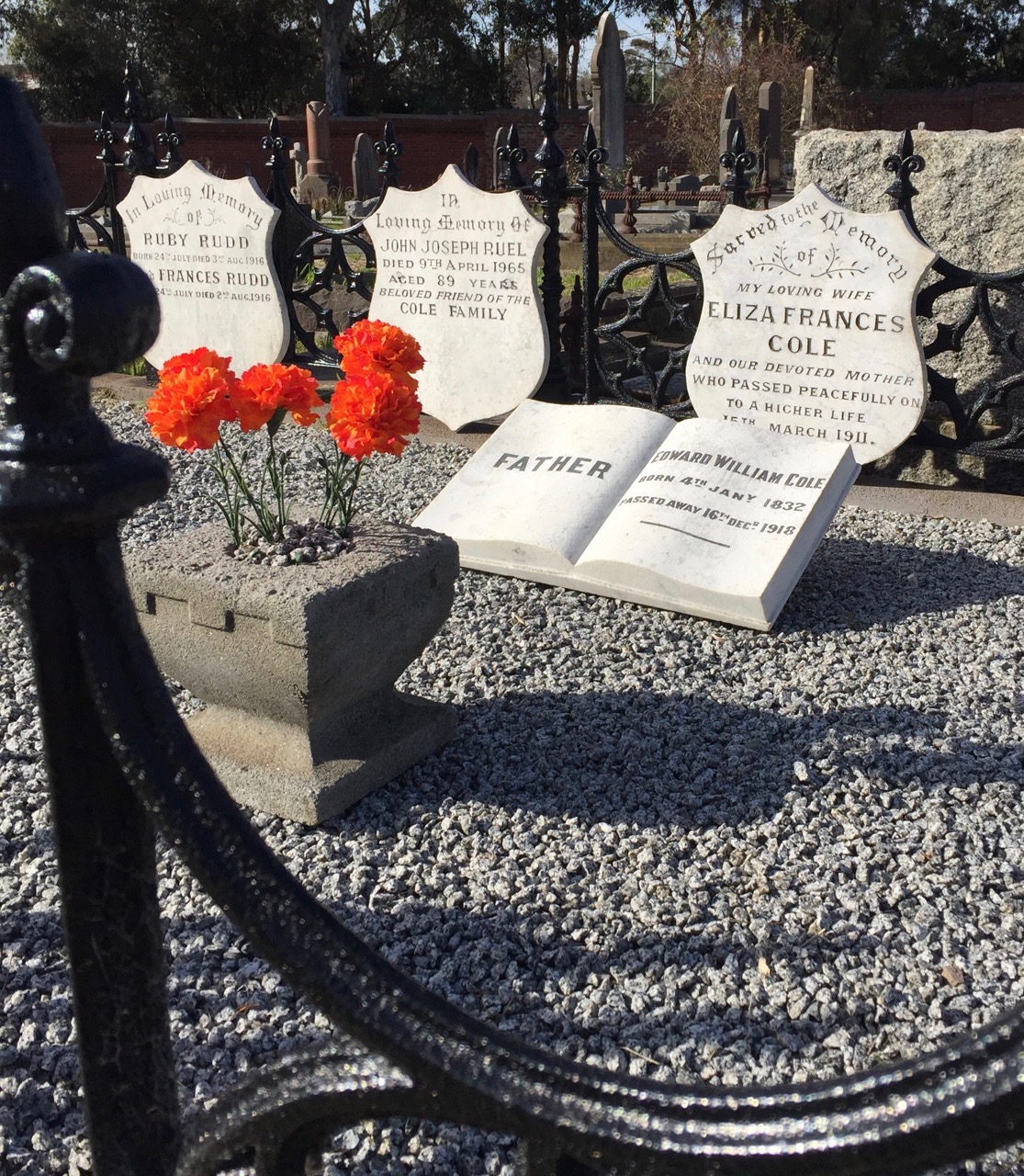 Cole’s own simple tombstone on his grave at Boroondara Cemetery, Kew, Melbourne, and behind his, that of his wife Eliza Frances Cole.