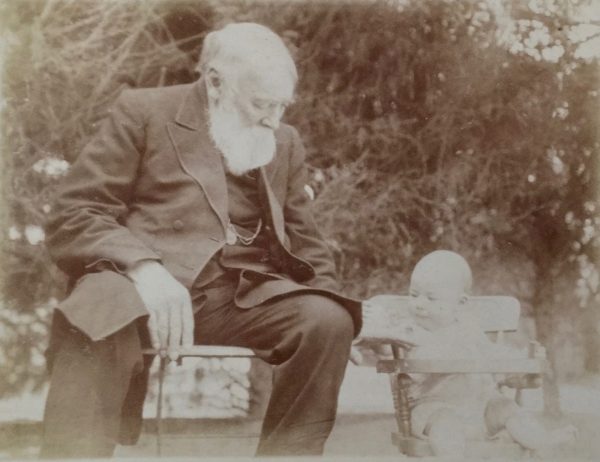 E . W. Cole in his garden at Earlesbrae with grandson William Antony Cole Rudd,
taken during 1918 – the last year of Cole’s life and the first year of William’s.

William Antony Cole Rudd was the third child and first born son of Cole’s youngest daughter Ivy Diamond and her husband Rupert Clarke ffrench Rudd. Ivy and Rupert were living at Earlesbrae when William’s older twin sisters, Ruby and Frances, were born on July 24, 1916 but both died at only 10 days old. William was born on December 7, 1917 and is my father.
William lived to be 101 years old and died on October 29, 2019. In 2016, he established the E W Cole Foundation and this website has been underwritten by the Foundation.
During my own life I have been drawn to my great-grandfather’s views of the world and this website hopefully allows his thoughts and ideas to be available in a manner which Cole could only dream of.
I share his vision of Let the World Be Your Country and To Do Good Be Your Religion (see D42 under Tokens).
My own Cole-inspired thoughts are expressed at rationalreligion.net.