World at a Glance

The cover of Cole’s New Map of the World (pictured left) is described as Designed, Compiled, and Published by E. W. Cole and issued by him on his 83rd Birthday. 4th January, 1915. The use of a third person pronoun indicates it was issued on his behalf, probably by Henry Williams. 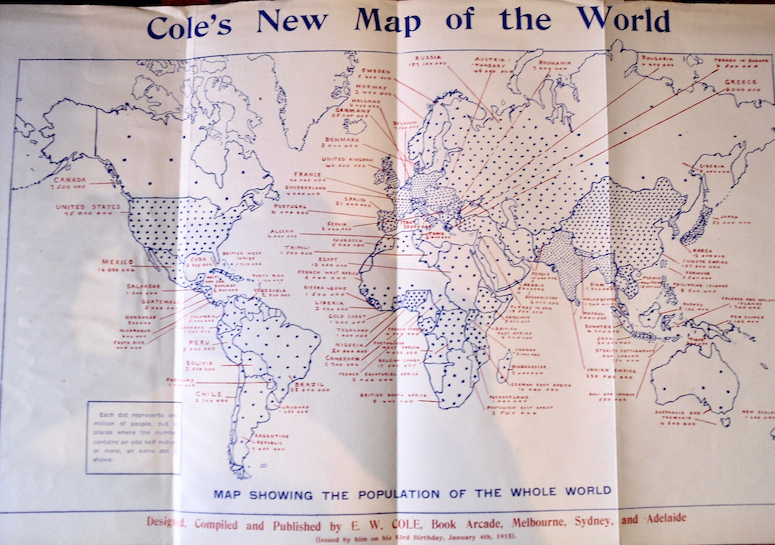 The legend inside the box at the lower left says Each dot represents one million of people but places where the number contains an odd half a million or more, an extra dot is shown. A 4.7MB 2 page .pdf showing the cover and the map is available here.

Cole also produced A New Map of Concentrated World Knowledge entitled “The Whole World at a Glance.” No known copies of the original map are known, but advertisements for it claim that The Map is printed in 15 colours; the size is 60 by 40 inches and is mounted on canvas and rollers; and for convenience of hanging, is also mounted in two parts. The price for one Map or the pair is 21/-; with Large Discount for Schools, Libraries, Booksellers and Canvassers. Sold Retail and Wholesale at Cole’s Book Arcades, Melbourne, Sydney and Adelaide. 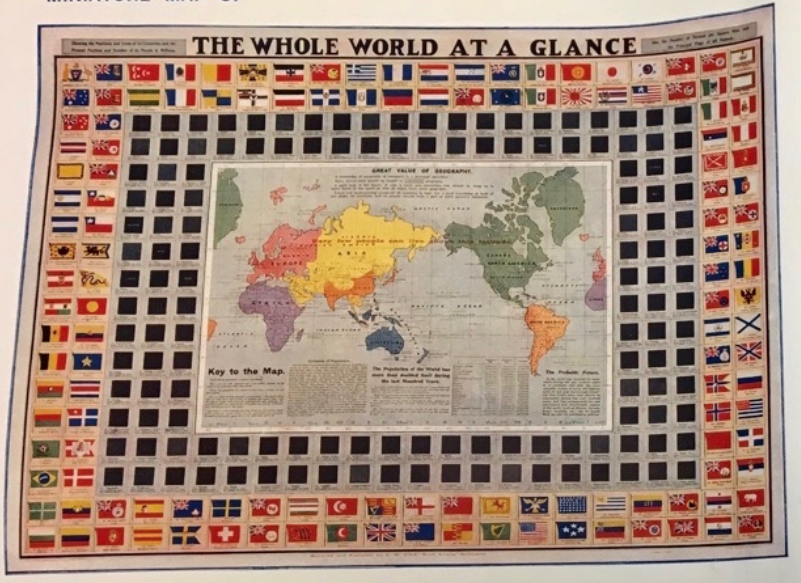 In his own advertisement for the map, Cole describes it as follows:

It contains the usual map of the world, showing all the natural features – oceans, seas, lakes, rivers, islands, mountains, plains, etc., also the principal  railways, telegraph cables, distances, towns, etc. But its special and uncommon features are that it shows the area, population, flag, and human faces of every country. It has 140 black squares, each in conjunction with the letterpress, shows the area, population and number of people per square mile, of the 140 principal countries. By 1700 red dots it shows the position on the earth of its 1700 millions of people. It shows that the population of the world has doubled during the last one hundred years; that people from the thickly-populated countries are emigrating or overflowing into the empty or thinly-populated countries. 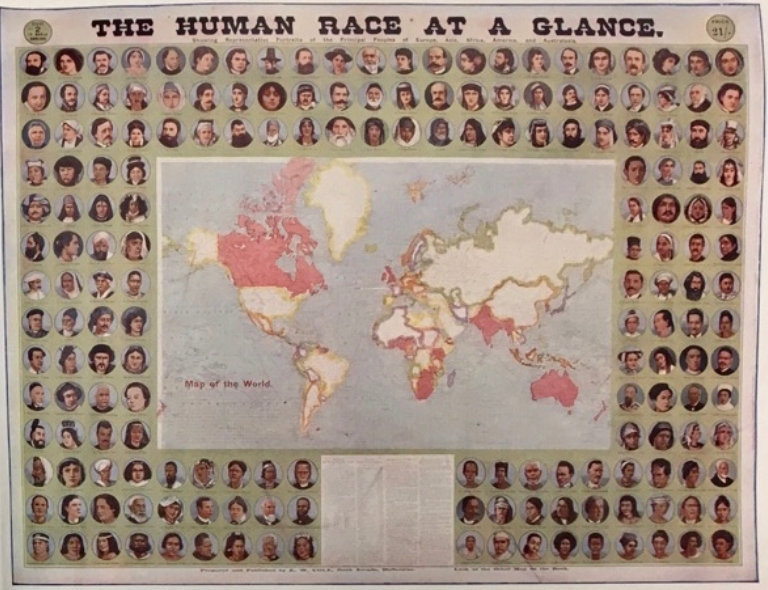 It shows representative portraits of the principal peoples of Europe, Africa, America, Asia and Australasia – 87 likenesses of men and 97 of women. It shows. also, the flags of the principal nations, to the number of 136. The object of the entire publication is to convey interesting, instructive, and useful information about the whole world, in a concise, yet comprehensive and easily perceived form. A map showing all the countries of the world, the population of all nations, the faces of all nations and the flags of all nations should interest everyone.

As the world has doubled its population during the last hundred years, it is probable that, with more scientific modes of living and hygiene, such as are now prevailing, it will more than double its population during the next one hundred years, and that consequently, the vast unoccupied and uncultivated regions of earth, such as Siberia, Canada, Brazil, Australia, etc., will be largely filled up with its overflowing millions.

Cole also produced a 32 page pamphlet entitled Humanity Number One, Containing The Human Race at a Glance in which he reproduced the photographs shown above, but in black-and-white. A .pdf (151MB) is available here. Note on page 31, under The Children of the World, Cole includes a portrait of his deceased daughter, Ruby Angelina, bottom row, centre, with the caption Our Ruby, English-Scotch.