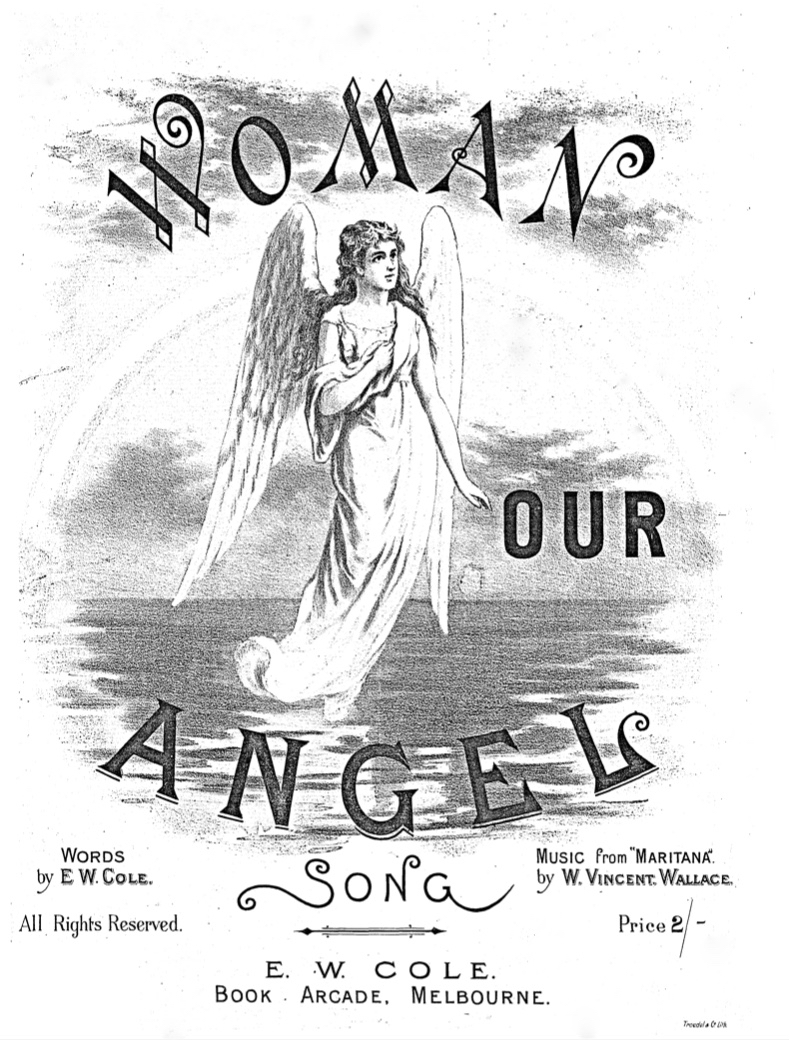 Music was a major part of the experience of frequenting Cole’s Book Arcade. The Arcade Band played two concerts daily – one in the afternoon and one in the evening. A nearby sign announced that:
The Band is now playing [space for name of song]. Obtainable at our Music Department Downstairs.

At the Music Department downstairs, one could not only buy the music being played, but purchase a musical instrument to play it on and then have a repertoire of music from one of Cole’s compendia:
A. The Thousand Best Songs in the World
B. Cole’s Funniest Songbook in the World
C. The Best Songbook in the World. which is a combination of A. and B. above in a single publication, but with page numbering restarting for B.
D. Cole’s Treasury of Song: A Collection of the Most Popular Songs Old and New.

A 22 MB .pdf of A. The Thousand Best Songs in the World above is available here. Only the first 16 pages out of 384 pages of songs are included as samples.

At the top of almost all pages in all compendia the reader is advised: Music of all the Songs in this Book sold at Cole’s Book Arcade, Melbourne. 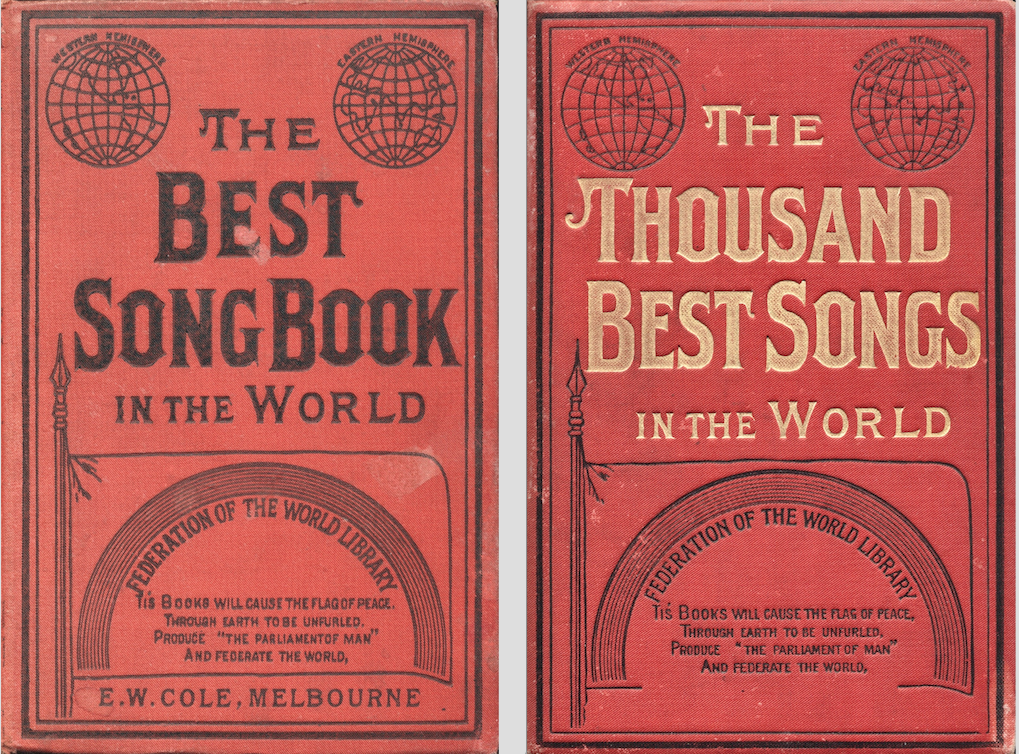 In the preface to both A. and C., Cole says:

… Songs are the most fascinating of all literature, because they blend the beauty of the voice with the wisdom of the intellect and the feelings of the heart. In the whole range of social enjoyments and instructions, there is nothing more enjoyable and instructive than a good song, clearly, feelingly, and intelligently sung; and where all can join in the chorus or the song itself, in meeting or in family circle, it is the most fraternising and socialising of all occupations or influences.

… Such being the tremendous influence of songs, I would like, in conclusion, to add a word or two on the responsibilities of the singer. In selecting this volume of choice songs, I have read or glanced over not less than sixty thousand, and I must say that for the most part such a lot of contemptible and utter rubbish I did not believe existed in the world. Nineteen twentieths of the songs that are sung in the Music Halls of England and America are a disgrace to the intellect of man. Songs, as I have shown, have a great moving and teaching power, and it is the high privilege and duty of the gifted singer to use this great and pleasing power for the good of his fellow-men by singing good songs instead of bad ones. Funny songs are good, but let them contain real fun; Sentimental songs are good, but let them contain wisdom or feeling – or both – in a word, sing bad songs and your own time and that of  your audience is wasted; sing good songs in a clear, distinct voice, so that every word can be heard and understood, and you make yourself one of the greatest blessings to humanity, through the blessing and instruction you convey.

In the preface to B., Cole says:

Comic songs are frequently a mixture of humour and vulgarity, and sometimes worse than vulgarity, and are therefore to a great extent banished from the best society. Now, the comic songs of the world contain much fun, portraying the humorous side of life in a pleasing and forcible manner, and it is a pity that they should be excluded from any society in consequence of objectionable passages. I have tried, therefore, to include in this collection the good comics, and exclude the objectionable ones, which I am happy to say are really not many in number; at the same time, we must not act too much the prude and the hypocrite, professing at times to be shocked at words and expressions which are in themselves commonplace enough in everyday life. To make a book readable as well as singable, I have interspersed a number of comic recitations and tit-bits through it, and grouped the entire collection under various headings. 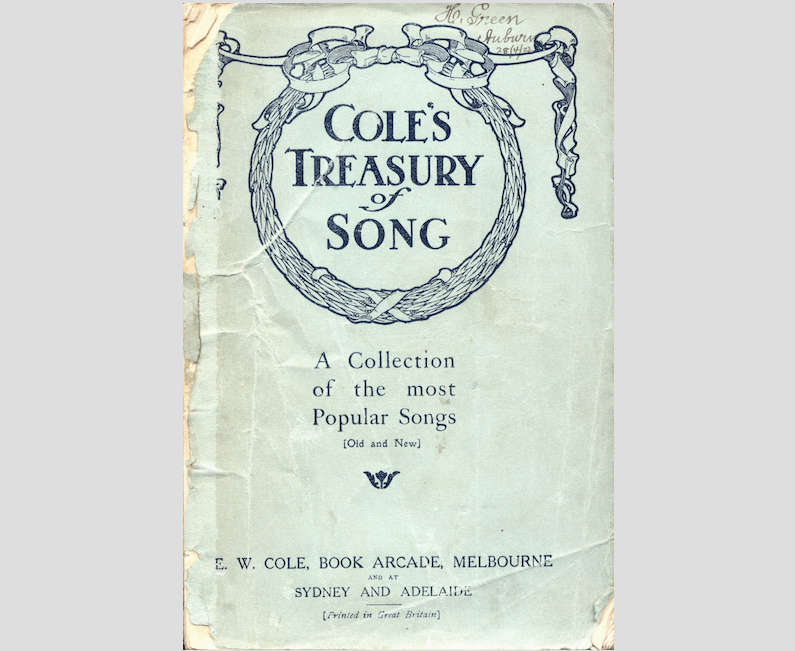 Cover of D. Cole’s Treasury of Song: A Collection of the Most Popular Songs.

In the preface to D., Cole continues:

This book is the response made by the publishers for another volume of a similar character to their “Thousand Best Songs in the World.” It is a proof of the astonishing wealth of our Song Literature that it was possible after former gleanings to gather together such a rich and varied anthology.

The use of the third-person ‘their‘ in this preface indicates that the publication may well have been produced after Cole’s death in 1918. 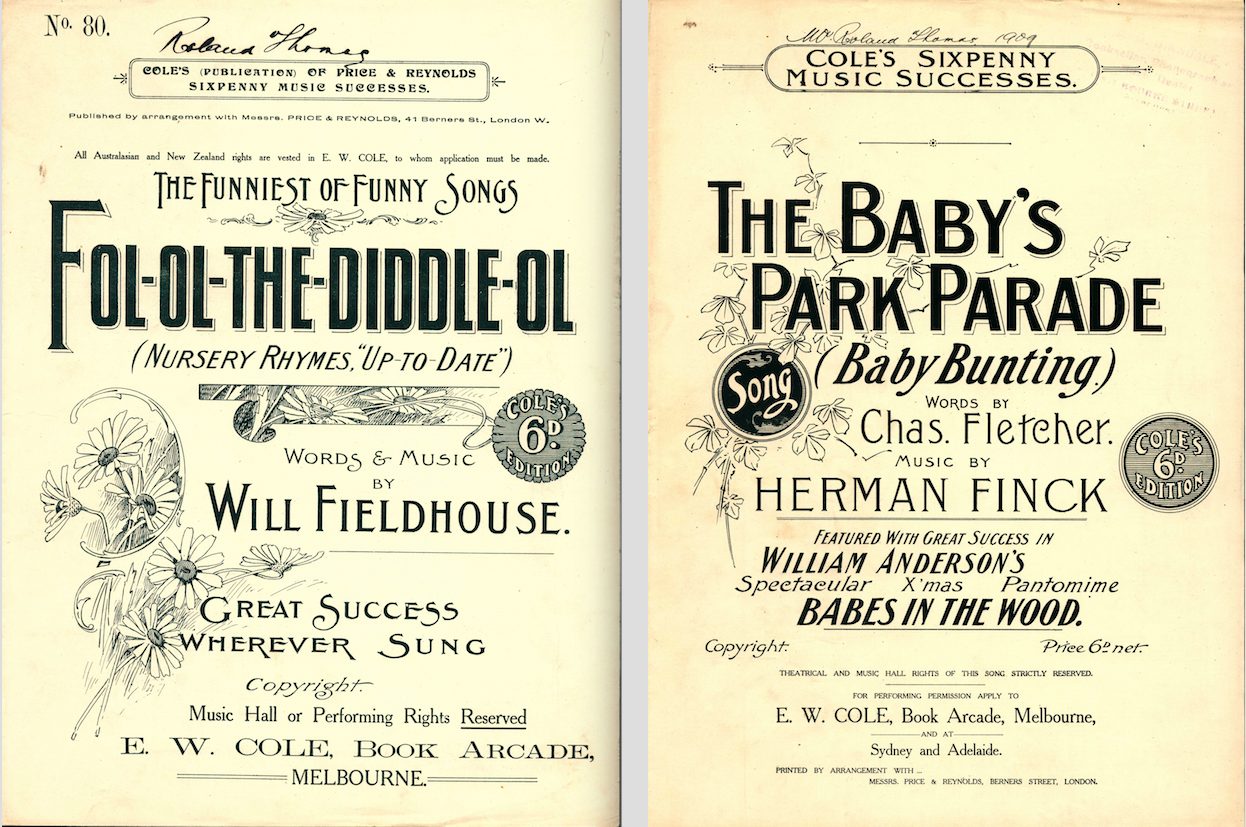 Two examples of the music being played by the band available downstairs
at Cole’s Music Department. An 11 page 41MB .pdf of the above examples plus a variety of others is available here.

The featured image at top left is Cole’s only known foray into publishing his own song, writing lyrics to music by W. Vincent Wallace entitled Woman Our Angel. A 4 page 890KB .pdf of the music score and lyrics for piano and voice is available at this here. The lyrics alone are also included in Selected Works Part II as item 3. of 4. and appears on pages 149-150 of the 373 page publication. Woman Our Angel has also been transcribed into its own 2 page  3.4MB .pdf which is available here.

Cole’s Commonwealth Music Books No. 35 Popular Piano Solos, showing cover (left), inside front cover (centre) and inside back cover (right).
A 4 page 28MB .pdf of these pages plus back cover is available here.

Cole also produced Cole’s Commonwealth Music Books, with Volume 35 shown above. NLA have digitised eleven issues listed below with links to the associated .pdf. The last is number 44* and includes a note in several places Copyright by Bayley & Ferguson 1926. It is therefore possible that much, if not all, of this series was produced after Cole’s death by his grandson Cole Turnley who had purchased all Cole’s copyright, together with Cole’s son, Val. See newspaper report here.