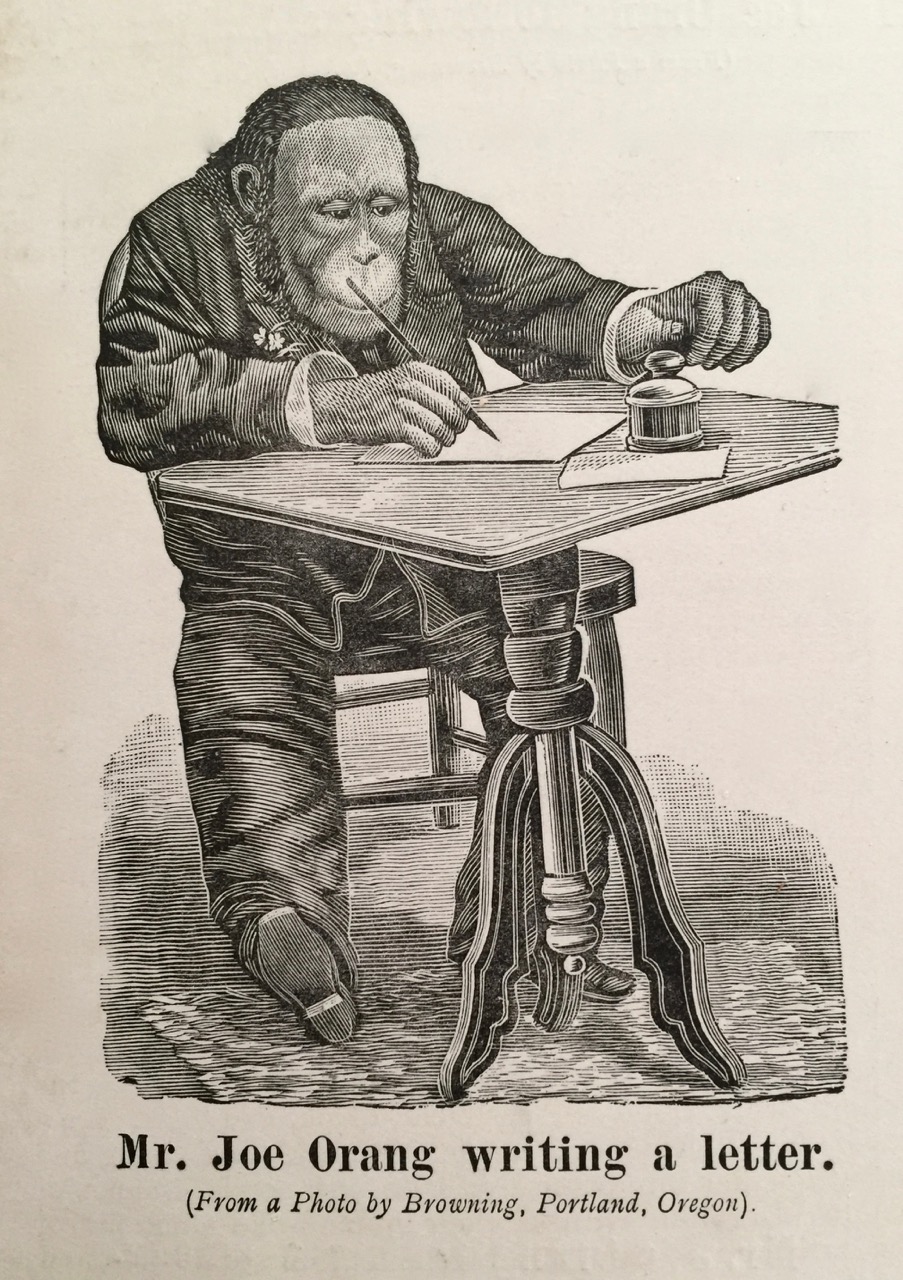 Animal Next to Man

Cole kept a menagerie of monkeys at the Arcade, much to the delight of children, who would encourage their parents to visit the Arcade and spend money there. It was all part of Cole’s plan to keep his premises full of customers. But as with many enterprises in which Cole was involved, there was a serious side. From a pamphlet entitled The Animal Next to Man in 5 Numbers, he wrote:

Reader – I have read much about monkeys, seen many, and have many monkey pets of my own, (comprising about ten different species from Africa, Ceylon, India, Malacca, Java, etc.) at the Book Arcade, Melbourne; and I can assure you that as I come to know them better I am much surprised at their many little half-human ways, and feel convinced that the monkey is yet destined to take a much higher stand in the estimation of man. I hope to study my little collection of monkeys yet more, and to relate the result of what I can observe of their character and ways.

I HOPE and believe and feel, with a firm but indescribable sense of certainty, that man is immortal. Whether the animals are immortal, I know not; but this I do know, that besides intelligence they possess friendliness, and faithfulness, and love, and sympathy, and gratitude, and many other attributes that go to build up the better character of man.

The love and devotion of the dog to his master, (it may be to his poor, worn-out, heart-broken master, just on the verge of the grave, and deserted by all his human friends), has nothing more sublimely affecting in the highest human examples, seen in everyday life, or read of in history. The dog will love, and follow, and die in defence of his master, and sometimes pine and die with grief over his master’s grave.

The monkey, if given a fair opportunity, is as gentle, loving, and faithful as the dog, and it is far more intelligent and human-like in its nature, structure and a greater variety of thoughts and actions. Even the four man-like apes, the Orang, the Gibbon, the Chimpanzee, and the mighty Gorilla, savage as they are in their wild state, show themselves intelligent, gentle, loving, and docile as children, if taken young and treated with kindness and love. The taming of the savage animal by kindness and love, is exactly the same as the taming of the savage man by kindness, and love. Kindness begets kindness, and love, begets love between man and animals, as between man and man.

That divine attribute LOVE, whose vital food is reciprocity, and which reproduces what it feeds upon, is the same wherever it is found, in the animals or in human beings. 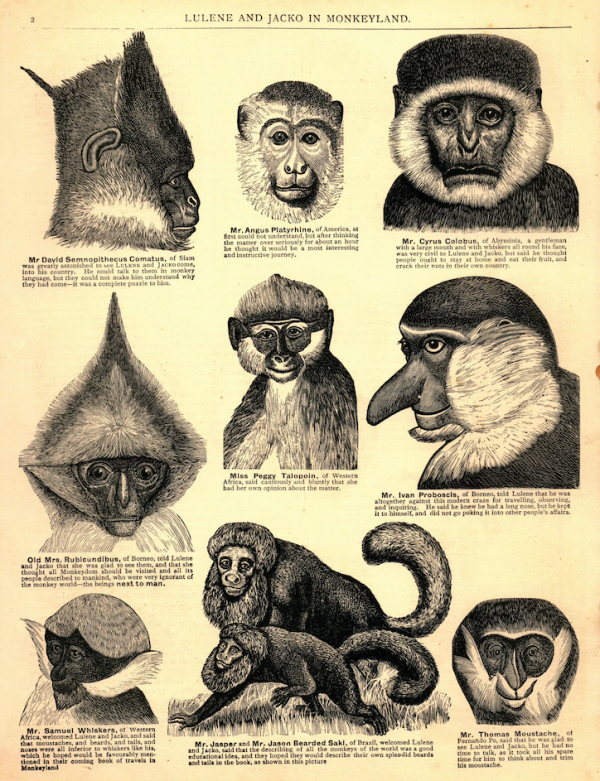 Mankind does not yet understand the nature of animals. We see them in their wild state, and kill many of them without the slightest feeling or regret. We have partially domesticated the dog, the cat, the horse, the ox, the elephant, the camel, and a few others; but of the thoughts, and feelings, and latent capacities of most of the animal kingdom, we know little; but this we know, that animals can be tamed by kindness, and that they have language, and reasoning powers – ah! and moral qualities too.

And that these intellectual and moral qualities are innate as they are in the savage man, and require only opportunity to develope themselves. Apes and other monkeys have naturally these qualities in an eminent degree. One writer, in an article entitled “Some Poor Relations,” beautifully puts the case thus:-

“By watching the habits of apes and monkeys in their own homes and observing the intercourse they hold with each other there we shall best understand their capacity for holding intercourse with ourselves. When an animal is brought into contact with us, and shows himself to be grateful, docile, amusing, clever, and loving, it is not because we have made him so, or changed his nature in the least. No man, woman, or child can give an animal one of these fine qualities or feelings, though he or she may draw out what he has already.

“It is merely that the habit of living or associating with us becomes a necessary part of our captive’s or servant’s existence: he learns to bestow on his human companion the same devotion which he formally bestowed on mates, little ones, or friends of his own kind. It is within human power to increase the good qualities of animals by constantly drawing them out, or it is in our power to make animals worse instead of better, by suppressing all their nobler faculties and crushing their kind feelings. But we did not give, and can never entirely take away, the beautiful powers of love and self-sacrifice they naturally possess.” 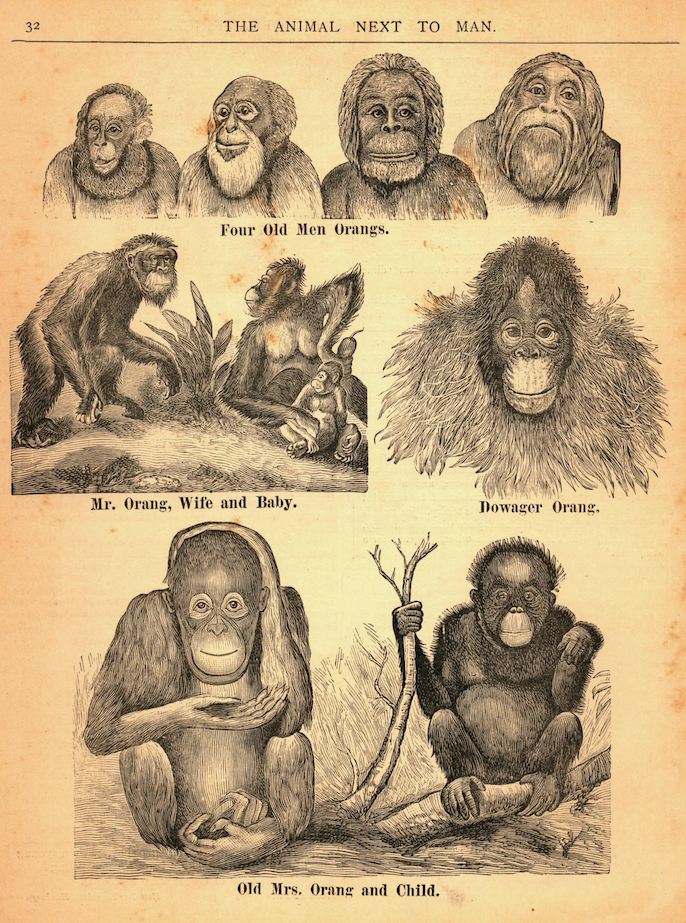 Mr. Garner, the famous writer on the speech of monkeys, and an earnest and persevering student, for many years, of the whole monkey character, says:- “We find in them the rudiments from which all the faculties possessed by man could easily develope, including thought, reason, speech, and the moral and social traits of man. In brief, they appear to have at least the raw material out of which is made the most exalted attributes of man.”

Monkeys in a hundred respects are very human, and when we come to know them well we notice one after another these human-like traits. I have fifty monkeys of several species, and one thing that I have noticed in particular is the intense liking of all female monkeys for little ones. No human female delights more in nursing a human baby than does the female monkey of all ages in nursing a baby monkey, whether it is her own or not. Bring a little baby monkey to any female monkey, and she will at once adopt it with the greatest delight, put her arms around it, hug it, and talk about it in monkey language, and if any stranger attempts to touch it will fight for it. I have a very affectionate, intelligent monkey named Fanny. She has a baby is six months old. Another female of a different species has been in with her the whole of to-day nursing the baby. I went in to see them this evening, and had the greatest difficulty to make her give the baby up to its mother. She sat and hugged it, and looked exactly like a real little woman, nursing the baby with the greatest affection. Fanny will never let it away from her, but nurses it most carefully – very like a human mother. If she goes out of the cage for a little while and the baby does not at once cling to her she will put her hand in and drag it out as much to say, “Come on, it’s its mothers own!” just as a human mother sometimes does.

To man is given the power to deal with all the animal world, and he is gradually exterminating beasts of prey, reptiles, wild boars, buffaloes, kangaroos, and those animals which he does not require, and reproducing and spreading over the earth, and caring for sheep, oxen, horses, fowls, dogs, cats, and all those animals which he does not require for his maintenance or pleasure; and to him is delivered the duty of trying to understand their natures and of dealing with them as he is beginning to do, in justice, kindness, and love. What the future of the monkey family may be I know not; for although monkeys are largely eaten in monkey countries it seems a kind of cannibalism which must die out; and it will be repugnant to the feelings of the coming man to reproduce the these human-like beings for food as we do now sheep and oxen. Therefore, a few only may be allowed by man to remain upon the earth under his care for his amusement and instruction. What the man-like apes might have attained to by this time if they have gone through hundreds of generations of culture like the dog, we cannot say. Possibly they might have made inferior men, and may yet by culture make inferior races of men; but this is not desirable, and I think not likely, for there are probably not more than two or three millions of them upon earth, and they always die early if brought into a cool country or are even domesticated in their own. Probably, like the mastodon and dodo, and some of the aboriginal races of man, they will die out before the advance of civilization. With respect to the smaller monkeys, “THE LITTLE MEN,” I think it probable that they will continue to remain on earth in limited numbers, to delight and love mankind, and that mankind will learn to understand and, consequently, appreciate and love them more than they have done in the past.